So lets start with the stand out mistake in the title, “sea dinosaurs”. This term is used a lot so we thought we would cover it off and explain. An explanation of what a dinosaur is classed as is below.

Though this website has been focused on the land reptiles – the dinosaurs,- we had to include the life that was in the oceans as food chains sometimes became interlinked. So, its good to produce a few articles and pages focusing on the marine, and other retiles that were present during the dinosaur Mesozoic era. 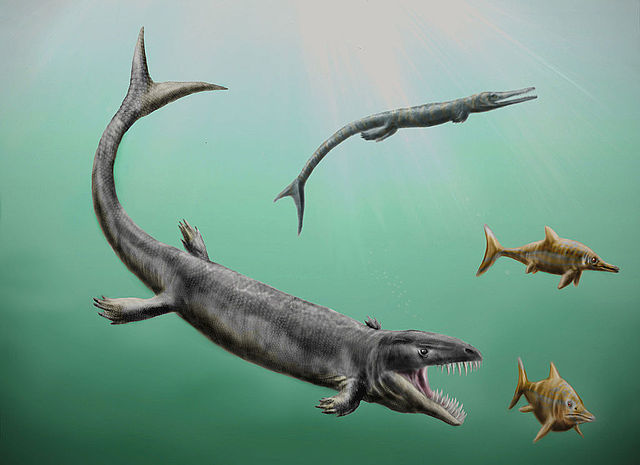 During the Permian – Triassic extinction period, which was the most extensive extinction event recorded, up to 95% of Marine species became extinct due to volcanic eruptions that caused the sea temperature to increase and the oceans became more acidic due to the increased carbon dioxide in the atmosphere.

This meant very few species of marine life could survive these harsh conditions and so post the extinction period the earth moved on to the Mesozoic period and more specifically the start of the Triassic period which was 251.9 to 199 million years ago.

As so much of the marine reptiles or sea dinosaurs, were wiped out some land creatures started to evolve into the water. There were a group of reptiles called Ichthyosaurs (“fish lizard”) and they had long, flexible bodies and probably swam by moving side to side like eels.

More advanced Ichthyosaurs had more fish like bodies with tails and had paddles to help them become very efficient swimmers and so far palaeontologists have named over 100 different species, although there were probably a lot more that have yet to be discovered. Ichthyosaurs lived around 248 to 95 million years ago and they have been found worldwide and are all thought to have lived in the ocean. 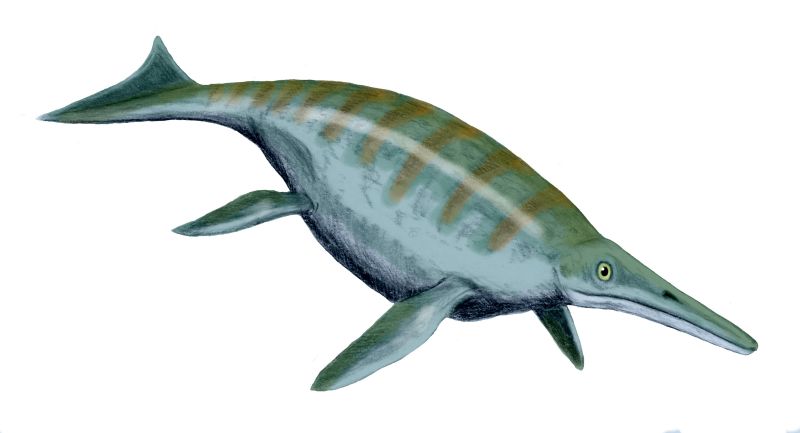 The size of Ichthyosaurs varied greatly with some being as small as 80cm long, and some like the Shonisaurus was over 21 meters (69 feet) long. If we compare to the modern Blue whale that is known to grow up to 29.9 meters (98 feet) long, Shonisaurus was not far off this length and would have been a dominating creature of the ocean.

With some fossil discoveries being found, palaeontologists believed some Ichthyosaurs were deep divers, it meant in the darkness they were able to approach prey quickly and undetected.

An example of a long necked Plesiosaur was the Elasmosaurus that lived in the Late Cretaceous Period 80.5 million years ago. Elasmosaurus measured 10.3 meters (34 feet) in length but the astonishing feature was its neck that made up 7.1 meters (23 feet) of the length of the Plesiosaur alone. At a quick glance you could think that the is was a large sauropod in the water, but that was not the case.

They had streamlined bodies, long paddles, which indicated that they were active and good swimmers, but their speed would have been limited. They would have been active hunters, possible scouring the sea beds for prey, and would have swallowed the fish whole as they had teeth that were designed for seizing and not tearing. 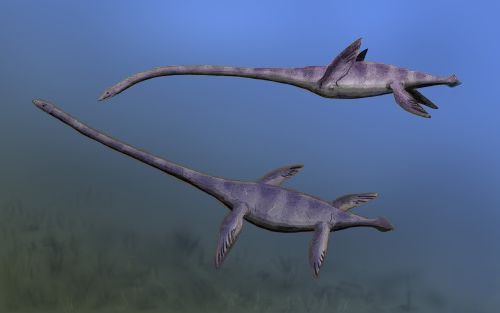 The first fossil was discovered in 1867 and named in 1868, and since then scientists have been fascinated by this species. There has been a lot of debate regarding the amount of vertebrae Elasmosaurus had some scientists think its around 72, for comparison, giraffes have 7

Pliosauroids (also known as Pliosaurs) were known to swim the oceans during the Jurassic and Cretaceous Periods and short necked with large heads, and big toothed jaws, like modern day crocodiles. They were carnivorous, and ranged from 4 to 15 meters (13 – 49 feet) in length. 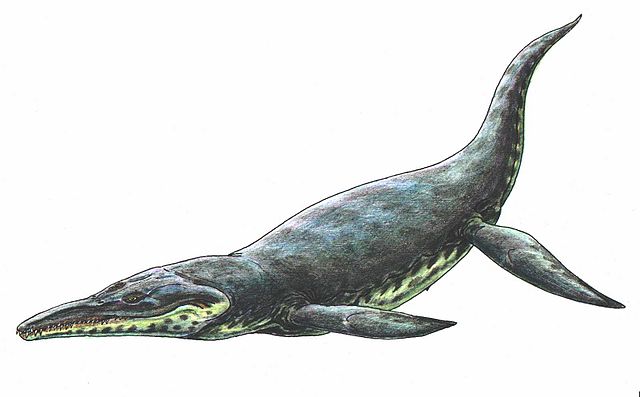 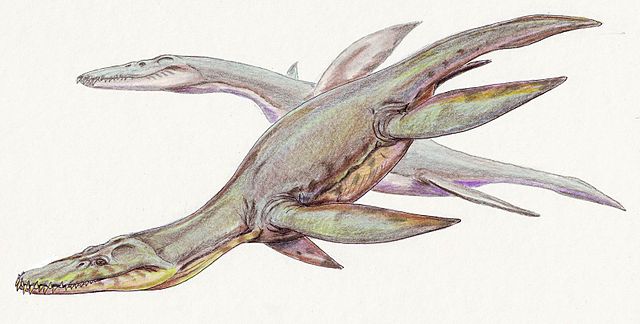 One of the biggest Pliosaurs to be discovered was a student in Mexico in 1985. The “Monster of Aramberri” was said to have been 15 meters (49 feet) long and lived 140 million years ago in the shallow waters of Armberri, Mexico. This is yet to be named and there is limited published data.

It is thought that Mosasaurs evolved from aquatic lizards and were swimming the oceans of earth during the last 20 million years of the Cretaceous period before they became extinct. They were powerful swimmers and were very well adapted to their habitat. With a body shape similar to some lizards, they had webbed paddles, and broad tails.

The smallest known Mosasaur was the Dallasaurus turneri, it was less than 1 meter (3.3 feet) in length, most species were longer than 4 meters (13 feet). The biggest discovered was the Mosasaurus hoffmannii which lived 82 to 66 million years ago during the Late Cretaceous stage. This Mosasaur was 10 – 15 meters (32 – 49 feet) in length and weighed 14,000kg and likely to be an active predator that ate a variety of marine animals. It was likely the Mosasaurus hoffmannii hunted in deep waters but was best adapted for surface stalking.

Like modern whales the Mosasaur was considered to be a big breathing fish and its barrel shaped rib cage would have allowed it to surface for air and then go to the deep waters. Scientists believe that like other Marine reptiles Mosasaurs were air breathers as the originally came from land species which evolved.

Through time marine reptiles became fully adaptable to their habitat and like the Mosasaurus hoffmannii some even became apex predators. It took millions of years for these reptiles to evolve and when the next extinction episode occurred many did not survive. Read about “How did the dinosaurs die” to discover why marine reptiles like the Mosasaurs became extinct by clicking here. 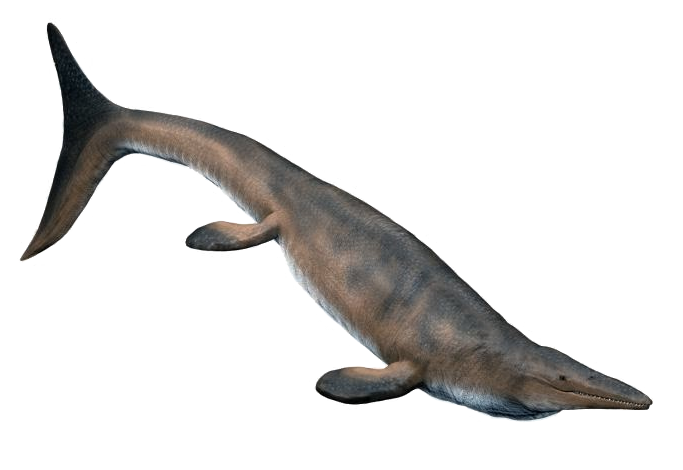 Tylosaurus (TIE-low-SAWR-us) was a mosasaur, a large, predatory marine lizard closely related to modern monitor lizards and to snakes.

Along with plesiosaurs, sharks, fish and other genera of mosasaurs, it was a dominant predator in the seas of Central America during the Upper Cretaceous period, 85-80 million years ago.

Tylosaurus was among the largest of all the mosasaurs, along with Hainosaurus and Mosasaurus, reaching maximum lengths of 49 feet (15 metres) and weighing around 7 tons. It had a sleek body and long, narrow, muscular jaws and a blunt, powerful head from which it takes its name, and which may have been used to ram and stun prey and used in intraspecific combat. It had agile flippers and a flexible fin on the end of its long tail.

Tylosaurus was a carnivore and fed up on fish, turtles and other reptiles. Stomach contents associated with specimens of Tylosaurus indicate that this ferocious mosasaur had a varied diet which also included sharks, smaller mosasaurs, plesiosaurs and flightless diving birds such as Hesperornis.

Tylosaurus was involved in the famous 19th-century feud between the famous palaeontologists Othniel C. Marsh and Edward Drinker Cope (commonly known as the ‘Bone Wars’).

Arguing over a set of incomplete Tylosaurus fossils, Marsh suggested the name Rhinosaurus (‘nose lizard’) while Cope touted Rhamposaurus instead. It was left to a third famous paleontologist, Charles Sternberg, to make the most amazing Tylosaurus discovery of all, a specimen with the fossilized remains of an unidentified plesiosaur in its stomach

Archelon (ARK-eh-lon) was huge marine turtle (a chelonian), the largest that has ever lived. Archelon, other turtles (chelonians) and reptiles may have descended from captorhinids, primitive anapsids that lived during the Early Carboniferous period, about 340 million years ago and went extinct at the end of the Triassic period, about 250 million years ago.

Archelon was a sea going turtle, related to present day Leatherback Sea Turtles. It measured more than 13.5 feet (4 metres) in length and about 16 feet wide from flipper to flipper. The live weight of an Archelon is estimated at more than 4,500 pounds (2,200 kilograms). 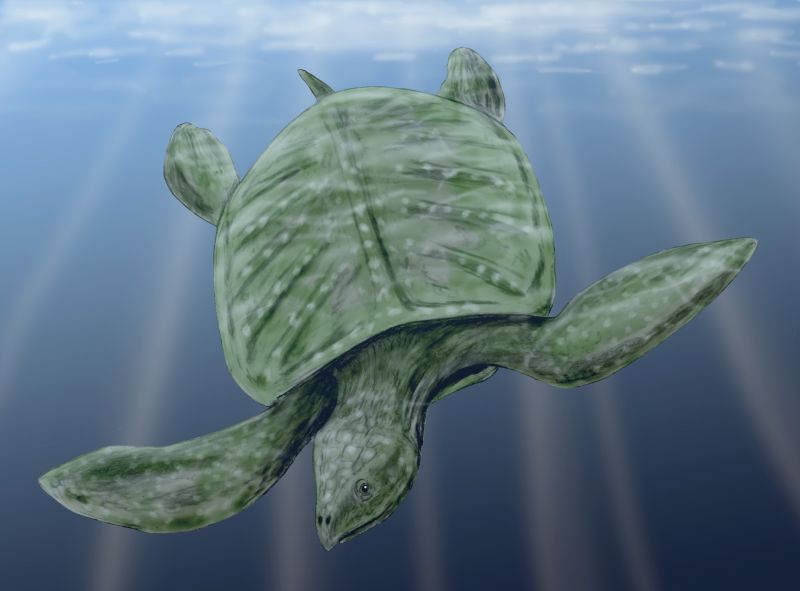 Archelon had a solidly-roofed skull with no opening (except for eyes and nostrils). It swam using its paddle-like flippers and legs.

Archelon was a carnivore (meat-eater). Because of its very weak jaws and toothless beak, it may have eaten jellyfish as its main diet. Archelon lived in the seas in what is now North America. 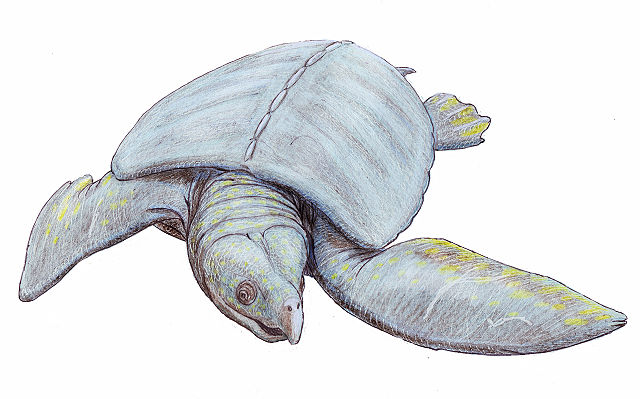 Fossils have been found in Kansas and South Dakota, USA. Its fossils date to 70 million years ago in the Cretaceous period, when a shallow sea covered most of central North America.