Pachycephalosauria when translated from Greek means ‘thick headed lizards’, due to their very distinctive heads. Their heads all had extremely dense bone which formed a dome shape – which we’ll come on to a bit more later.

All Pachycephalosauria are believed to have walked on their two back legs which makes them Bipedal, similar to the way an ostrich walks / runs.

Pachycephalosauria were classed as being herbivorous / omnivorous which means that their diet predominantly consisted of plants and shoots.

How big were they?

As a family of dinosaurs, Pachycephalosauria were classed as fairly small species of dinosaur, with most species that have been discovered estimated to be up to 3 meters in length (10ft).

The largest species within this family was the Pachycephalosaurus which is thought to have reached around 4.5meteres in length and weighed around 450kg (900lb).

When are where did they live? 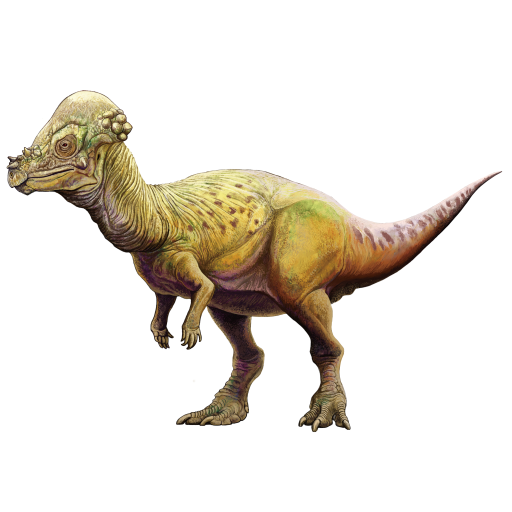 There is much debate among the scientific community regarding exactly how Pachycephalosaurs used their heads, with two theories still being the topic for hot debate even to this day.

The top of the skull of Pachycephalosauria is thought to have been constructed from very hard bone thanks to areas of the skull being fused together, creating an incredibly thick, rock solid skull.

The three areas of the skull that formed this solid skull of the Pachycephalosauria were the frontals which is the front part of the skull or the ‘forehead’, parietals which makes up the side of the skill, and finally the closing of the supratemporal fenestra.

This incredibly hardened skull would have also had a ring of spikes surrounding it, which would have caused significant damage upon contact. 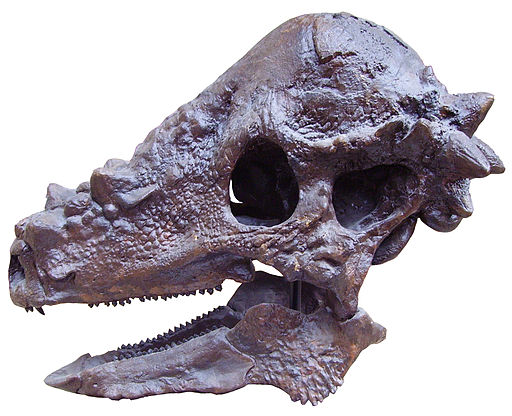 Credit to – user Ballista from the English wikipedia., CC BY-SA 3.0, via Wikimedia Commons

The second theory regarding Pachycephalosauria skulls is that they were extremely dense, but actually incredibly fragile. Any direct impact to the skull may have caused significant injury to the dinosaur.

The other key discussion point around this theory is that their bodies may not have been designed to deal with the impact stress. What we mean by that is that upon head impact the stress that would have been sent down a pachycephalosaurid’s neck, spine and tail would have been immense.

These two arguments will be continued to be debated for many years to come, and as scientists have only discovered partial skeletons of pachycephalosaurus species to date this makes solving this these questions much harder.

You’ve now discovered some evidence for and against the case in the way Pachycephalosauria used the heads to either ram each other for dominance or defence against attack from a predator.

The image shows the hypothesis around the types of head ramming behaviour that may have been carried out by Pachycephalosauria.

Pachycephalosauria may have engaged in short rucks, with their heads in very close proximity to each other trying to gain control over their opponent.

They may have also used their head ramming in a similar way to that of modern day Stags or even Bison to ascertain male or female dominance, taking a small run up and clashing heads at speed.

Furthermore they may have used their head to ram the sides of competing males or predators causing significant damage to the thigh or rib area. 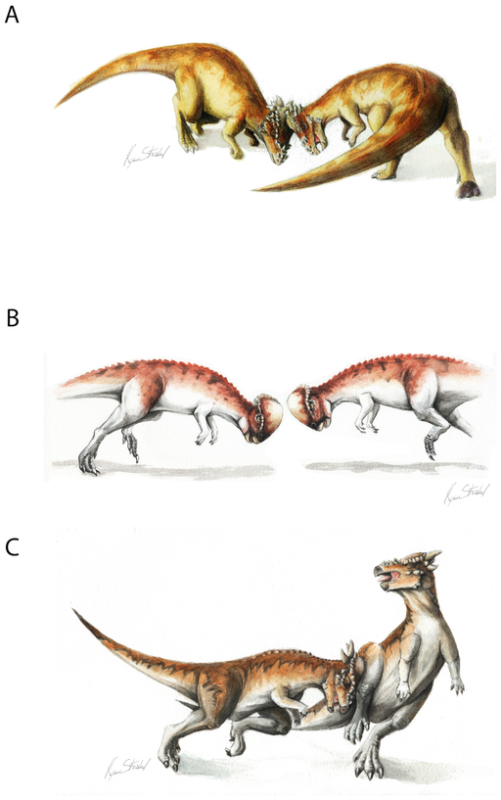 Scientists have tried to recreate a picture of what they believe Pachycephalosaurus may have looked like from the very little fossilised remains. From these reconstructions scientist believe that Pachycephalosaurus would have had small arms, a large bulky body, long legs and a thick, ridged tail. 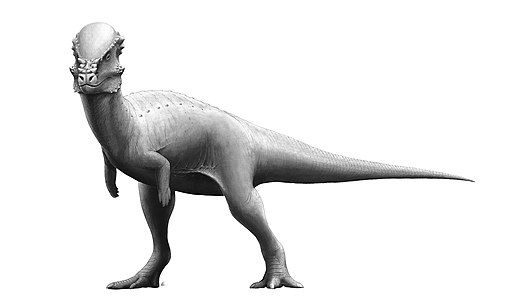 As is common in other dinosaurs Pachycephalosaurus had a very small brain in comparison to the rest of its body, which would have been neatly projected by the very thick bony skull.

How big was Pachycephalosaurus?

Pachycephalosaurus as mentioned earlier was the largest Pachycephalosaurid, with scientists believing it could reach sizes of up to 4.5 metres (14 ft) in length and weigh as much as 450kg or (990lb).

Pachycephalosaurus would have walked on two very strong back legs classing it as a bipedal, meaning if it was alive today it may have moved similar to an ostrich.

Scientists also believe that Pachycephalosaurus would have had very good eyesight, with particle discoveries of the skulls showing that it had large eye sockets meaning potentially having larger eyes. Pachycephalosaurus eyesight would have been one of the best found in any dinosaur species, described as being ‘binocular’.

Stegoceras is a fascinating pachycephalosaurid and one of the smallest too. Stegoceras is believed to have been roughly about the same size as a large dog in terms of height, and been up to 2.5 metres (8ft) in length.

They were not very heavy either, with adults being estimated to weigh up to 40kg (88lb) and would have walked on two back legs, with two short arms at the front and a strong rigid tail. 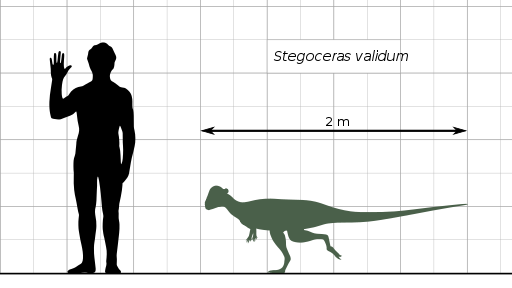 The skull of Stegoceras still had the distinctive bony dome, and when viewed from the side was triangular in shape with a short snout.

Unlike other pachycephalosaurids Stegoceras had what some scientists refer to as a ‘shelf’ located at the rear of its skull, which can be seen in the image.

Scientists also believe that baby Stegoceras were not born with the distinctive bony dome at the top of the skull, and were actually formed as the dinosaur aged. This hypothesis allows scientists to potentially predict the age of the Stegoceras based on the size of its bony dome. 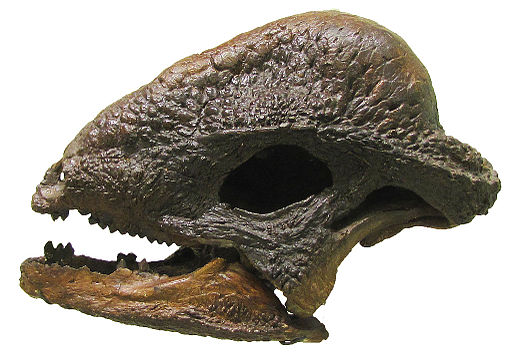 Prenocephale which translates into “sloping head” due to the very distinctive shape of its skull. Prenocephale was a medium sized pachycephalosaurid which could could get up to 2.4 metres (8ft) in length and weigh up to 130kg (290Ib).

As mentioned previously and what is a very common theme for this particular species of Dinosaur, very little fossilized remains of Prenocephale have been found, so predicting its actual size has been difficult.

One key feature of this Dinosaur which has been found and has been well documented is its skull. The skull of Prenocephale was rounded but was also sloped in shape toward the snout area.

Prenocephale would have lived in the Late Cretaceous in what is now classed as Mongolia today. This area wouldn’t have been a dry desert environment back then, and would have been seen scurrying around in the dense forest.

Though very little remains of Prenocephale have been found, scientists do agree that Prenocephale would have been very similar in terms of shape and size to other Pachycephalosauria species, with a short snout, two short arms, a thick body, and walked on two hind legs.

Below is a list of the group of dinosaurs which make up Pachycephalosauria family. This list will be updated as soon as a new specimen is discovered. In the meantime, you can start discovering more information about the individual types of Pachycephalosaurids by clicking the links below: