Ornithopods are members of the group called Ornithopoda which means “bird feet”. This comes from the Greek words Ornithos (“bird”) and pous (“feet”). They started out as small, two legged runners possibly during the early Jurassic Period, 200 million years ago, and then evolved in size and numbers until they became one of the biggest groups of herbivores during the Cretaceous Period.

The name was given due to their distinguishing 3 toed feet. The early Ornithopods were small but very fast and they probably needed to be to survive. They were then around 1.5m (4.9 feet) in length. As time went on, they got bigger and then adapted to grazing on four legs while their bodies curved over to compensate for this.

They eventually became very big but only as big as medium sized sauropods. In fact, the largest ornithopod was the Shantungosaurus and this was 23,000kg in weight and grew to 15 meters (50 feet) in length. 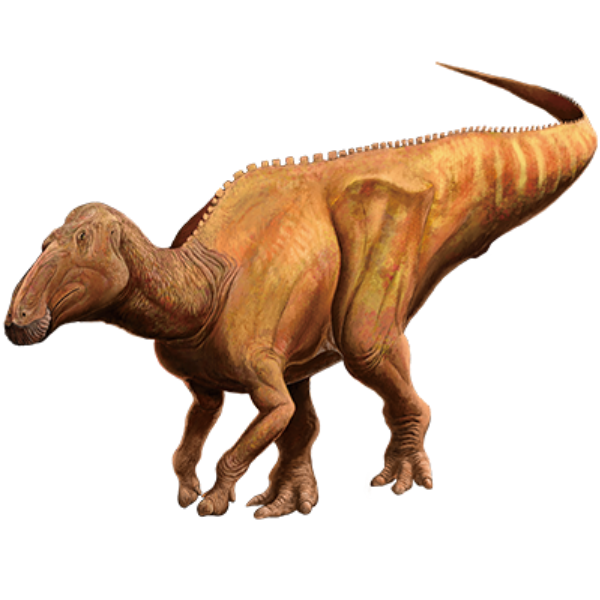 DataBase Center for Life Science (DBCLS), CC BY 4.0, via Wikimedia Commons Above is the Edmontosaurus

Orthiopods were classified and given their name by the American Professor of palaeontology Othniel Charles Marsh in 1881 who was classifying the dinosaurs. He then subdivided them further into three families: Iguanodontidae, Camptonotidae (later renamed Camptosaurus), and Hadrosauridae

We will break Ornithopodia down into those three families now.

This is a superfamily of dinosaurs that were categorised due to their extended jaws, they were herbivores and they were large in size. There is evidence that they moved around on two legs (bipedalism) and also four limbs (quadrupedal).

One of the most interesting dinosaurs that was in this family was the Iguanodon. This was a dinosaur that lived in the now countries of Belgium, Spain, Germany, England, Portugal, and possibly in other countries as yet undiscovered.

Like the family it descended from it was a bulky herbivore and had distinctive features such as its large thumb spikes which is believed to have been used to fend off predators. 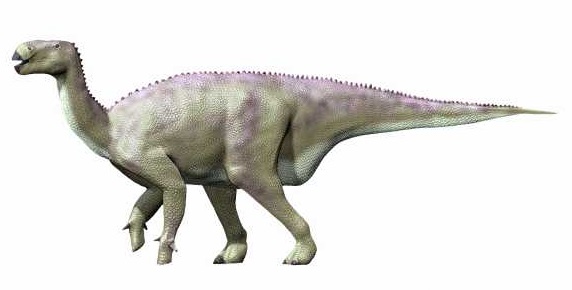 Its teeth relate to its name, “Iguana – tooth”, and as the name suggests, it had teeth like those of iguanas only they were much larger and were tighter together. It probably spent a lot of its time grazing and moving around on all four limbs and was able to reach higher to feed off vegetation higher up.

How big wERE iguanodontian?

Iguanodon was around 9 meters (30 feet) long, and weighed 4,000 – 5,000kgs and they were herbivores during the Late Jurassic period to the early Cretaceous Period.

Camposaurus were heavily built, two – legged, plant eating, beaked dinosaur that lived during the Late Jurassic period in North America. Its in a family of its own as per Othniel Charles Marsh, but some scientists have considered it to be an early member of Iguanodontidae.

They have been estimated to be up to 7.9 meters (26 feet) in length and up to 874kg (1926Ibs) in weight. They had robust hindlimbs and broad feet and estimations have been made that they were able to reach speeds of up to 25 kph (15 mph). It was thought that even though it had short forelimbs it still was quadrupedal.

Fossils have shown that its teeth had shown wear and tear which indicated to scientists that it had a diet of tough vegetation. A Camposaurus species was on display at the Carnegie Museum in Pittsburgh (America) for 75 years until 2008 when it was decided that it was in fact a unique species.

These were early family members of Ornithischian dinosaurs, that were less than 2 meters (6.6 feet) in length. They had long tails, and scientists have not been sure what they ate due to their teeth being like other carnivoran mammals. Some scientists think they were herbivorous dinosaurs while other have said she should be categorised as omnivorous dinosaurs.

Fossils of Heterodontosauridae’s have been found globally on all continents apart from Australia and they lived for around 100 million years from Late Triassic to the Early Cretaceous periods. 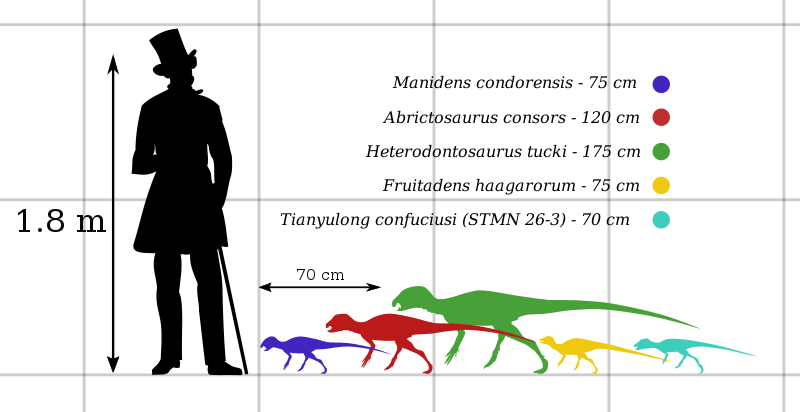 An example of a Heterodontosauridae is Abrictosaurus (“wakeful lizard) which lived in the now Southern African region during the Early Jurassic Period 200 to 190 million years ago.

They were small, around 1.2 meters (4 feet) long and weighed less than 45kg (100 Ibs). They had small forearms and were possibly omnivorous.

They are known by only two individual fossil remains that were discovered in Lesotho and Cape Province, South Africa in 1974 by Palaeontologist Richard Thulborn. 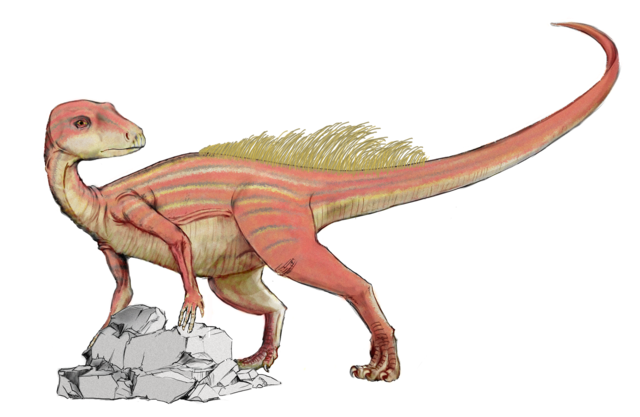 Their name meaning speaks for itself, as these dinosaurs had a flat duck-bill appearance of the bones on their snouts. This was their most recognisable feature by far, as it was their stretched bone at the front of their skull called the rostral bones that gave them this look. These were decendants of the Heterodontosauridae family.

They lived during the late Cretaceous Period and were wide spread globally in continents, as we know them now, such as Africa, Asia, North America, and South America.

They were scaled and not feathered dinosaurs, and were herbivores with their jaws designed for grinding plants with the ability to replace rows of teeth as they got worn down.

The Lizard from Edmonton

Edmontosaurus was one of the largest Hadrosaurid dinosaurs as they reached 12 meters (39ft) in length and weighed around 4,000kg.

It was a bulky dinosaur that had the definitive Hadrosaurid feature of the “duck billed beak”, as well as a laterally flattened tail. It had smaller front legs than the rear, but they were strong enough to be used for standing or movement.

Its thought this meant Edmontosaurus was probably on all four limbs when it moved around or stood still but could switch to supporting its weight on its hind legs if it needed to move quicker. In fact some scientists believe Edmontosaurus could have reached speeds of up to 45 kph (28 mph) which would have made it nearly as fast as a Kangaroo. Sadly if it could have gone at this pace it probably was not quick enough to run away from a Tyrannosaurus rex that overlapped timescale with the Edmontosaurus, which meant the T Rex would have been hunting it down.

Scientists have concluded that some fossils that have been found which had distinctive damage to their spines probably came from a fierce attacks from Tyrannosaurus.

Edmontosaurus was a herbivorous and used a typical, but very effective technique to strip branches of nutritious leaves and shoots by closing its jaws in a clamshell- like way and then moved its head along allowing it to rapidly get maximum plantations to feed off.

Below is a list of Ornithopods that make this group. This list will be updated as soon as a new specimen is discovered. In the meantime, you can start discovering more information about the individual types of Ornithopods by clicking the links below: