ThE KING OF THE DINOSAURS

The Tyrannosaurus rex is probably the most famous dinosaur of them all, not only because it was portrayed in the Hollywood film Jurassic Park. Tyrannosaurus rex was the biggest meat-eating Dinosaur that ever roamed the face of the Earth. We are fascinated by this dinosaur, and we are constantly learning about the T rex, with improved technology.

The name Tyrannosaurus originates from Greek words and means “King of the tyrant lizards”. When broken down it means “Tyrant” and “Lizard”, the Rex in Latin means “King”. Its often referred to as “T rex” for short.

Fossils were first discovered in North America and palaeontologists have long debated whether the Tyrannosaurus was a scavenger or a predator, although many experts now accept it was probably both. 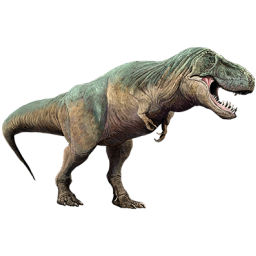 Tyrannosaurus rex was first discovered in 1902 when a huge skeleton was uncovered in Montana, USA by American Palaeontologist, Henry Fairfield Osborn.

The largest discovery was by Sue Hendrickson who was an explorer and fossil collector, in the South Dakota area of the US on 12th of August 1990. The name given to this T rex was “Sue” and “Sue” was sold at auction in 1997 for $8,3m. The dinosaur is now on display at the Field Museum of Natural History in Chicago.

Most Tyrannosaurus fossils have been discovered in North America and some in Asia, some scientists believe it was possible that the Asian species of the T Rex migrated to North America originally.

The T rex lived on earth 68-66 million years ago during the Cretaceous period. This period was after the Triassic and Jurassic periods.

It was one of the last non-avian dinosaurs to exist before the extinction event which wiped out the dinosaurs.

How big was Tyrannosaurus?

Tyrannosaurus rex was a Theropod and could grow up to 43 feet in length and up to 20 feet tall. It weighed between 5.5 and 9 tons.

That’s basically the equivalent to the height of the tallest giraffe, and weighs as much as a big African elephant.

Tyrannosaurus reconstructions have shown that its body is quite upright and its tail curled round. To help aid its balance the body was likely to be horizontal and its tail held out straight, in order to compensate for its head.

The Tyrannosaurus rex had rough, scaly skin. It was like an alligator’s skin and was bumpy. Some have described it as “lightly pebbled skin”.

The Tyrannosaurus rex had a massive five foot long skull and a four foot long jaw. It found its prey often by using its immensely powerful sense of smell and could detect its prey across great distances.

Research has concluded that the T rex had the most advanced out of 21 dinosaurs that were compared. There was little that could escape this vicious dinosaur. 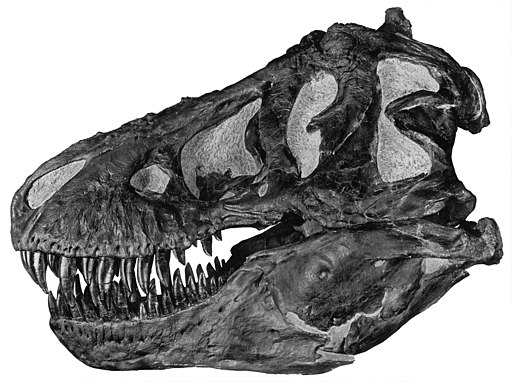 It ate its prey by using its 60 bone crushing, saw edged teeth, that ranged from very small to over 23cm long, and with those teeth it could produce up to 6 tonnes of pressure into one bite by channelling the force of its muscles. Once a T rex had hold of its prey there was probably little chance anything escaped. To keep the T rex from overheating it had vents in its head to help keep the brain cool while it was crushing its prey.

The T rex had tiny arms which measured only 1m or 3.3 ft long and it has been hypothesized that it used these for slashing its prey by using its claws to cause harm to its prey.

Having short arms may have been beneficial as long arms could be broken and susceptible to disease. Others believe that the arms were an evolutionary left over which served for no predatory purposes. 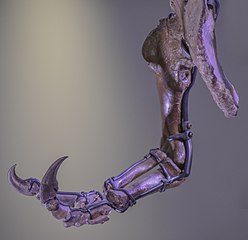 The speed of the T rex has often been debated and experts have stated that as the dinosaur moved on its two legs, it could have possibly reached speeds of 25 to 43 miles per hour. To put this in perspective, the fastest human over 100m has achieved a speed of 27mph so it’s estimated even he could not outrun the Tyrannosaurus.

Others hypothesize that due to the size of the dinosaur they could only reach speeds of 12mph. I am sure a lot of humans if that was the case could outrun a Tyrannosaurus out of fear alone.  What was not in question was the strength of its strong thighs.

HOW LONG DID T – REX LIVE FOR?

Tyrannosaurus rex lived for approximately 28 years and like most human teenagers, went through a growth spurt during this period of time in its life.

What did Tyrannosaurus Eat?

Tyrannosaurus rex was a pure carnivore, and like most of them, was an active predator and scavenger. It was said to hunt and eat other dinosaurs such as hadrosaurs, ceratopsians, and ankylosaurs.

Trex grew incredibly quickly and went through hundreds of pounds of meat and carcasses at a time. Fossils of Tyrannosaurus dung have shown it contained bones of its prey which evidenced what was known already about the sheer power of their bone crushing capabilities.

The T rex was a lone predator, there have been fossils discovered that show bite marks that were caused by another Tyrannosaurus rex. There is no evidence to what they fought over, but it could have been over mates or food. The winner of a battle would then be presented with a good meal of the defeated opponent which could potentially keep them going for weeks, even months.

The T rex was one of the most vicious predators the earth has ever seen but even they were no match for the asteroid or comet that crashed into earth and killed off three quarters of all life. This event wiped out the Tyrannosaurus along with other dinosaurs and brought a sudden end to the Cretaceous period.

The T rex comes from the family of Tyrannosauridae and its subfamily was Tyrannosaurrinae.

Before the Tyrannosaurus came Lythronax. A smaller version of the T Rex, this dinosaur was an older ancestor and roamed on earth approximately 12 million years previous. It was smaller that the T Rex both in size and weight.

Estimates are that it grew up to 30 foot (9 meters) in length and weighed around 2.5 tonnes. It had a widened jaw at the back which gave it extra power to allow its jaw muscles to tear through its prey and crunch through its bones.

Another ancestor that was a slightly smaller dinosaur to the tyrannosaurus was the Tarbosaurus. They were thought to be between 33 and 39ft (10 and 12m) long. Interestingly the Tarbosaurus eyes did not face forward due to the unexpanded rear of the skull which has suggested that it lacked the vision that the Tyrannosaurus had.

Tarbosaurus was said to have a similar excellent sense of smell and good hearing. Its jaws like all its close ancestors meant it had a fiercely effective bite force which it needed to effectively hunt other large dinosaurs in its environment.