Diplodocus was one of the longest land animals that has ever lived. It was longer than a tennis court and weighed as much as two fully grown elephants combined. If you took 20 ten year old children and lied them down so that they were head to foot together, that would be close enough to demonstrate the size of the diplodocus.

The name “Diplodocus” was given in 1878 and it comes from the Greek words “diplos” which means double and “docus” which means beam. Its in reference to the double beamed bones in the underside of its tail. The diplodocus is the best known sauropod dinosaur and roamed the earth in the late Jurassic period between 154 to 152 million years ago. 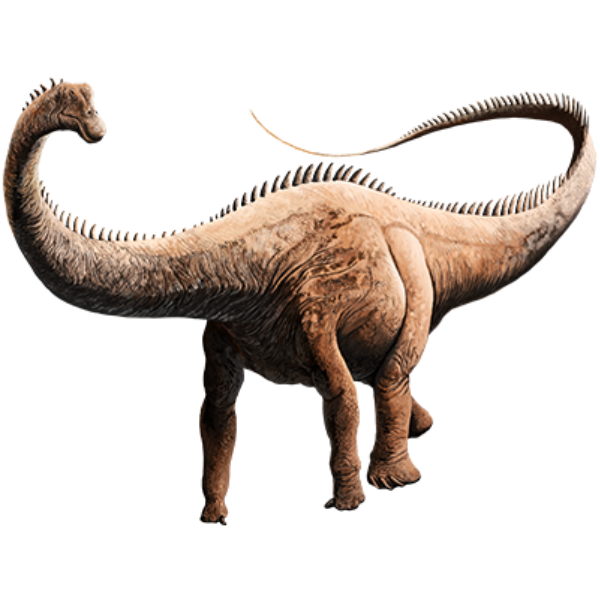 The first diplodocus fossil was discovered in North America in 1877 by Samuel Williston, an American palaeontologist. The name diplodocus was given to the long fossil by Othniel Marsh in 1878 who was a professor of palaeontology and was helping to study the fossils that came out of the famous Rocky Mountain region of Colorado.

Other fossils of the diplodocus have been found since, including when a team of fossil collectors who worked for a rich Scottish man named Andrew Carnegie searched for one. He was determined to have a giant dinosaur displayed at his museum in Pittsburgh, USA and he got his wish when the team found a diplodocus and then displayed the fossil in 1905.

It is still displayed today at the now famous “Carnegie Museum of Natural History” from where he donated casts to museums all round the world. The name “Dippy” was given to this fossil and is probably the most famous fossil in the world.

what did diplodocus eat?

As mentioned above diplodocus ate plants and was able to reach plants both on the ground and high in the trees. Scientists have also speculated that they even fed on submerged water pants that were located on riverbeds.

Interestingly the diplodocus had forward pointing teeth that were bunched and at the front of its mouth. The teeth were delicate and would be replaced rapidly. One study conducted that its tooth replacement rate was one every 35 days, if that was the case it meant the diplodocus ate abrasive foods. According to one study the diplodocus could not have been able to strip bark off trees due to its jaw muscles being able to move sideways rather than the classic vertical biting motion. The experts concluded that this meant the diplodocus was best suited to eat ferns and soft leaves off of trees.

How big was diplodocus?

The diplodocus had a total length of 24m (79 ft), it had a long neck that was over 6m (20 foot) , and an even longer tail. In comparison to its size diplodocus was a lighter build than other giant sauropods. Its weight estimations range from 10 to 20 tonnes which may sound a lot but wait until you read about its relatives a bit further on.

It comes as no surprise that the diplodocus was probably not a very quick dinosaur, its central weight was more to the back of its body, perhaps giving it greater ease to go onto its hind legs to extent its height.

The diplodocus had small spines along their necks, their body, and their tail. Diplodocus used its tail as a defence tool by using it like a whip against its predators. Its tail was a tri pod like feature that helped it balance while it went on its hind legs when reaching up into the tree tops. Diplodocus long powerful tail was also used to warn off predators by cracking it like a whip which was done with such speed it broke the speed of sound.

The diplodocus was thought to have its nasal openings high up on its forehead. An interesting theory on this was so that the dinosaur could adapt to water. But scientists have argued that point as sauropods in general had air inside their bodies making them unsuitable in very deep water. Its hard to imagine the diplodocus gracefully swimming in high waters.

Diplodocus lived in, what is now, North America 154 to 152 million years ago and this was during the late Jurassic period. Diplodocus was a herbivorous and lived in an environment that had wet and dry seasons, swampy lowlands, lakes and rivers.

There is little known about the nesting habits of the diplodocus and sauropods in general, although its thought they laid their eggs in shallow pits located in communal areas.

heart that weighed a tonne

One of the diplodocus’s most unique features was its claw was larger than compared to other sauropods. The claw was detached from the bones in its hands and was flat from side to side. It is unknown what the role of this claw was, and questions still remain.

Diplodocus is thought to have carried on growing throughout their lives after a fast growth spurt in the first 10 years. It was first thought that sauropods in general grew slowly at a steady pace, but research has suggested otherwise.

The diplodocus’s neck has fascinated experts for years with some thinking it’s neck was not that flexible while others have stated it was flexible so that the diplodocus could reach both plants on the ground and the leaves on tree tops. One scientist thought the its neck was probably at a 45 degree angle most of the time

The Barosaurus was another long necked, long tailed dinosaur that was related to the diplodocus. It was an enormous animal. Barosaurus was taller and measured more than 25 to 27 meters (82 to 89 foot) which made it slightly bigger. It also weighed around 12 to 20 tons.

Barosaurus was different to Diplodocus as it had a longer neck and shorter tail. Both their limbs were almost identical although their feet have never been discovered.

The first fossil was found in 1889 by Othniel Marsh and John Hatcher. Marsh named the fossil in 1890 ‘Barosaurus lentus’ 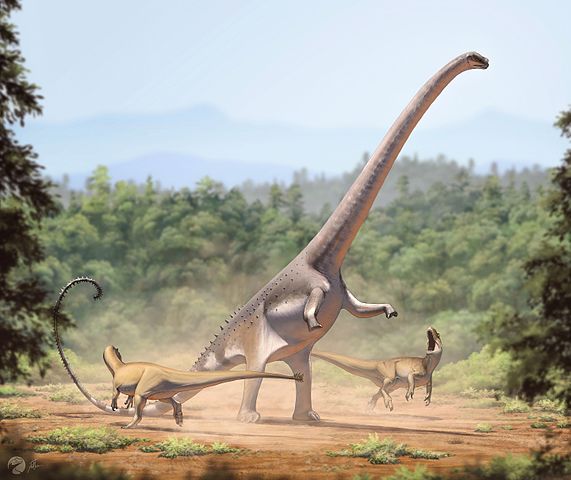 Greek for “arm lizard” Brachiosaurus lived in North America 154 to 153 million years ago and was discovered by American palaeontologist Elmer Riggs and named in 1903.

Like most sauropod dinosaurs Brachiosaurus had a small skull, a long neck, a large trunk, and a muscular long tail. It did have proportionately long arms which was why it was given its name. 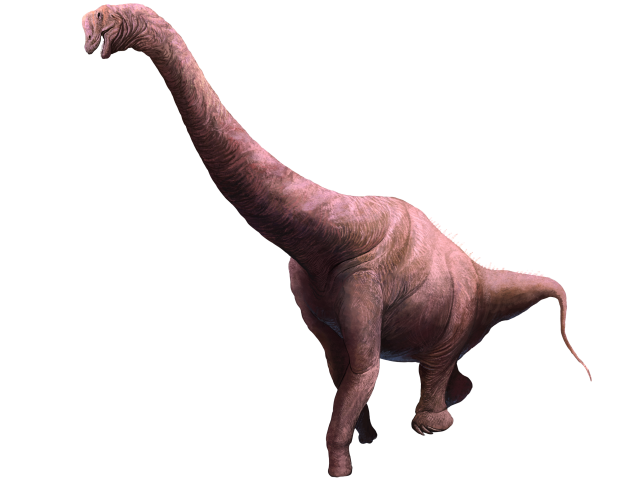 This was a giant sauropod dinosaur and was perhaps the largest known land animal ever. Its length ranged from 30 to 40 meters (100 to 130 foot), and it weighed between 50 to 100 tonnes.

It was during the Late Cretaceous period that this species roamed the earth in Argentina 99.6 to 89.8 million years ago.