Theropods are our favourite type of dinosaur here at dinosuargeek.com.

Theropods or to give them their Greek name which means “Wild beast foot”. Dinosaurs that would have had hollow bones and three-toed limbs would have been classed as a Theropods.

The name given to these now known Theropods was actually used for the first time in 1881 by a man called Othniel Charles Marsh, in which he described them as Theropoda (meaning “beast feet”).

Theropods are thought to have first appeared in the Triassic period around 231.4 million years ago with the most famous Theropod being of course the Tyrannosaurus rex. Though it’s important to note that it was in fact Allosaurus was one of the first dinosaurs classified as a theropod.

Theropods in terms of dinosaurs were predominantly carnivores, however as they evolved Theropods classification changed in terms of diet and they even evolved to become herbivores and even omnivores.

As we’ve mentioned before, the dinosaurs never really died out, and simply evolved. When the word Theropods is mentioned most people think about the Allosaurus or Tyrannosaurus rex. However, the  Theropods that you’re most likely to see today are more likely to land on your lawn or bird feeder.

Aside from the fact the Ostrich isn’t carnivorous, it has hollow bones, two large legs with three toed limbs. As the largest Theropod alive today, they are certainly not anywhere near the size of some of the gigantic Theropods we know and love. Ostriches can still reach 2.74 m (9ft) in height, and weigh between 90 -130 kg or 200 – 290lb.

How big wERE THEROPODS?

The king of the Tyrannosaurus Rex was thought to be the largest Theropod for over 50 years. However as larger and larger carnivorous dinosaurs have been discovered over the last few decades, the once mighty T-rex title of the largest Theropod was quashed by the much larger Theropods.

Discoveries including that of Spinosaurus, and Giganotosaurus have moved the goalposts (so to speak) as to the size and scales that Theropods could reach.

Scientists are still slightly baffled as to why Theropods – and dinosaurs as a whole – grew so much larger than any other animal ever to walk the earth. Plenty of theories out there, but science may not ever know the true answer.

Not all Theropods were massive. Some theropods such as Deinonychus form part of what’s called a  “subfamily” of theropods. This group in particular which included the Velociraptor was called Dromaeosauridae. The image below shows all the current dinosaurs which make up the sub family of Dromaeosauridae Theropods.

There were 27 major groups or classification of Theropods and many “sub families” which had some relationship to the main major groups. These include and are certainly not limited too; Tyrannosauridae, Carnosauria and Megalosauroidea.

So, we’ve briefly described what type of dinosaur is classed as a Theropod, but let’s dive in a little more as to some of the defining characteristics that Theropods had.

The first major characteristic of a Theropod is the bone structure. A theropod has hollow bones which would have had thin outer walls. This similarity in bone structure can be found in modern day birds.

The second major characteristic of a Theropod is found on their feet and hands. Let’s start with the foot structure which doesn’t look too dissimilar to that of what can be found on modern day birds.

Today’s bird species have a very close similarity in terms of foot structure to that of Theropods, with evolutionary evidence that shows flying reptiles keeping some scales on their legs. If you take a closer look at a chicken’s leg, you can see evidence to support this theory.

Theropods had three toes found on each of their feet. Three can be found pointing outwards in a ‘V’ shape, to keep the dinosaur stable when walking, with extra stability given by three large, curved claws found at the end of each toe.

The fourth toe is positioned to the back of the foot, almost around the heel area and off the ground. Theropod’s heels would have never touched the ground and would have elevated whilst the dinosaur walked.

Next let’s discuss the hands of the theropods.

The hands found on some of the giant theropods such as the Tyrannosaurus rex were pretty much useless, but it’s important to note that this wasn’t always the case, as an example Spinosaurus could use its arms – which were still small in comparison to the rest of its body – to hold on to its prey.  It is also believed the other much smaller theropods like Velociraptor may have used them to climb. 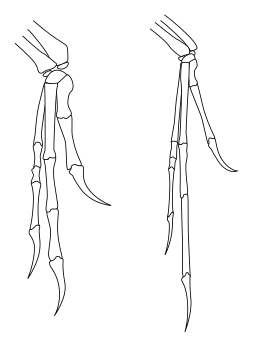 There were 27 major groups of theropods, out of the 27 we’re just going to cover four of the major theropod dinosaur groups.

The first is Herrerasauria, this according to Wikipedia is the earliest group of theropods to be discovered. These theropods are thought to be the oldest dinosaurs to ever live on the Earth in the late Triassic period around 233 million years ago.

Scientifically one of the best forensically studied theropods is the Herrerasaurus ischigualastensis, thanks to an almost complete discovery of this dinosaur in Argentina, in 1988.

This classification of theropods was not as big as the theropods that would appear over the next prehistoric periods, with most growing to around 4 metres or around 13ft long.

Sharat Ganapati from Chicago, USA, CC BY 2.0, via Wikimedia Commons

This classification of theropods featured some of the largest theropod dinosaurs that ever lived. These huge carnivorous dinosaurs lived in the Jurassic and Cretaceous periods around 176 million years ago.

Such humongous dinosaurs include Allosaurus and Giganotosaurus which were discovered in the 1990’s, changed science’s perception of how big theropods could get. Other fascinating characteristics around this class of Theropods is that they had very large eyes making their sight one of the best of any dinosaur.

Carnosaurias also had very narrow skulls, like that of modern-day crocodiles. Scientists also determined after studying remains of such Carnosauria Theropods such as Tyrannotitan had a longer femur bone than the shin bone.

Megalosauroidea lived between the middle of the Jurassic to the Late Cretaceous period between 85-170 million years ago. 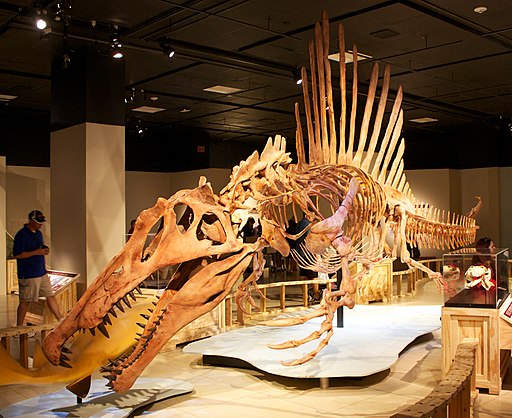 Mike Bowler from Canada, CC BY 2.0, via Wikimedia Commons

This classification of Theropod includes the Tyrannosaurus Rex which lived in the Cretaceous Period around 66-81 million years ago. Most of the discoveries of this type of theropod have been found in North America and within Asia.

This classification of Theropod were classed as Apex predators, dominating the landscape with the largest Tyrannosaurus rex discovered being over 12.3 metres (40 ft) in length. All tyrannosaurids were large, with not a single animal being under a tonne in weight, with the heaviest every to be discovered. 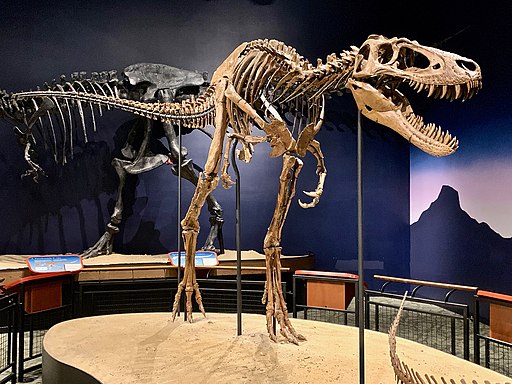 Tyrannosauridae had very noticeable features which included very large heads which were packed full of large teeth. Built for speed over a short distance Tyrannosauridae would have large strong legs. Finally, they had the distinguishably small arms with two small digits and the end.

Due to so many complete skeletons of Tyrannosauridae being found it makes this Theropod classification incredibly well scientifically documented in terms of diet, size and behaviour.

Below is a list of Theropods that make up the most of the major group. This list will be updated as soon as a new specimen is discovered. In the meantime, you can start discovering more information about the individual types of Theropods by clicking the links below: