Dilophosaurus means “two-crested lizard” and as the name suggests this was due to the crests that it had on his head. In the 1993 Jurassic Park movie, this dinosaur was incorrectly portrayed as having a fluttering neck crest when it was purely Hollywood theatrics.

This made the dinosaur “the best worst-known dinosaur” a palaeontologist named Adam Marsh was quoted.

Dilophosaurus was discovered in 1942 by Samuel Welles, an American palaeontologist and named the finding as a megalosaur (a super family of therapod dinosaurs).

The fossil found back then had no head crest but a later discovery by Wells in 1964, did have head crests, and so was formally named in 1970 with the 1942 discovery also being changed to Dilophosaurus.

Other fossils have been found outside of the US, notably in China in 1987 which scientists say shows how widespread this species roamed.

Dilophosaurus was a theropod dinosaur in the Early Jurassic period.

what did Dilophosaurus eat?

It was a predator by nature and Dilophosaurus was one of the earliest large predator dinosaurs. The theropods would evolve into being some of the biggest and most fierce predators that have ever roamed earth and Dilophosaurus played its part in the process.

Its teeth were discovered to be weak and so it is thought that Dilophosaurus fed on fish and small animals as it did not have the capability in fighting bigger prey. Some scientists did think they could have hunted in packs as some fossils have been found together but there was no other evidence supporting this and therefore was dismissed as the fossils could have been found together due to floods or other circumstances.

How big was Dilophosaurus?

Dilophosaurus had a lightweight build which made it fast on its feet and it needed to be to catch its smaller prey. Dilophosaurus was around 7 meters (23 feet) in length, 3 meters (10 feet) in height and weighed around 400 kilograms (880 Ib’s). Being a predator that hunted small animals and fish it needed to be fast and it was! It is believed it could reach a top speed of 30 mph (48 kmph) which just quicker than the fastest ever human for comparison.

Dilophosaurus probably lived in areas that were rich in vegetation such as forests, or rain forests where it was able to feed in nearby rivers, streams, and other water sources. Heavy rainfall was likely in its environment.

Dilophosaurus was discovered in 1942 by Samuel Welles, an American palaeontologist, and named he the finding as a megalosaur (a super family of therapod dinosaurs).

The fossil found back then had no head crest but a later discovery by Wells in 1964, did have head crests, and so was formally named in 1970 with the 1942 discovery also being changed to Dilophosaurus. He defined Dilophosaurus as being a ceratosauroid, which is a group of theropod dinosaurs.

Interestingly Welles spent 60 years doing research out of the University of California Museum of Paleontology and lived to 89 years old.

Other fossils have been found outside of the US, notably in China in 1987 which scientists say shows how widespread this species roamed. But its in Arizona US where most of the discoveries have been made. 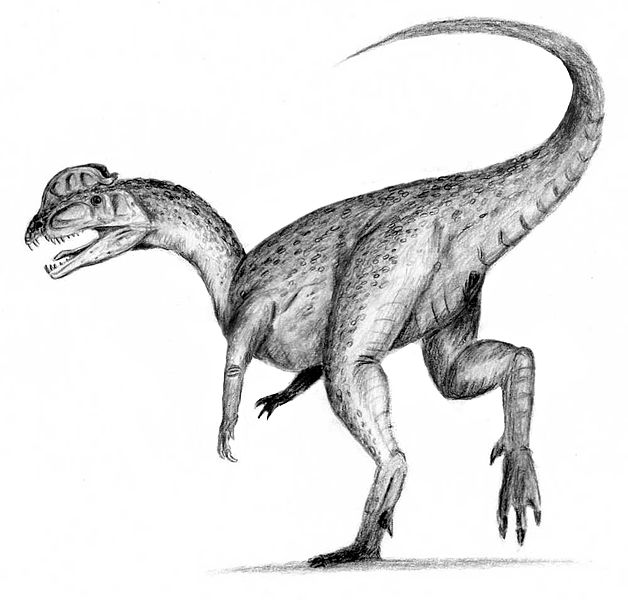 Dilophosaurus had a notch behind its first row of teeth which made it look similar to a crocodile, this notch was due to a weak area which connected the bones of its skull.

Dilophosaurus had a double crest that ran along its snout which was its biggest distinguishing feature although interestingly not every fossil found had these double crests.

The crests may have been brightly coloured, and could have been used to attract mates, intimidate other Dilophosaurus’s. Similar to what we see in peacocks today. One thing scientists are certain about is the crests were to weak for battle so unlike Stags who fight with their antlers, this was highly unlikely to happen when Dilophosaurus’s met.

The Crest themselves were constructed of thin bone and had air pockets in a honeycomb like pattern which protected and strengthened the crests. 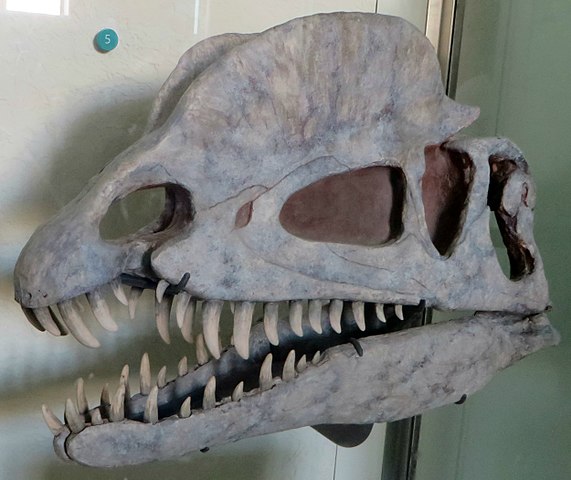 Eden, Janine and Jim, CC BY 2.0, via Wikimedia Commons

Sarcosaurus means “flesh lizard” and lived 199 to 194 million years ago so was around at a similar time to Dilophosaurus and in fact is the one of its closest relatives. It was 3.5 meters (11 feet) in length and weighed approximately 140 kilograms.

Its fossils have been found in England and again reinforces that the theropods spread worldwide as they became a dominant predator on the planet at the time. It was named by Charles Andrews in 1921 who was a British palaeontologist who first named the dinosaur shortly after fossils had been discovered. 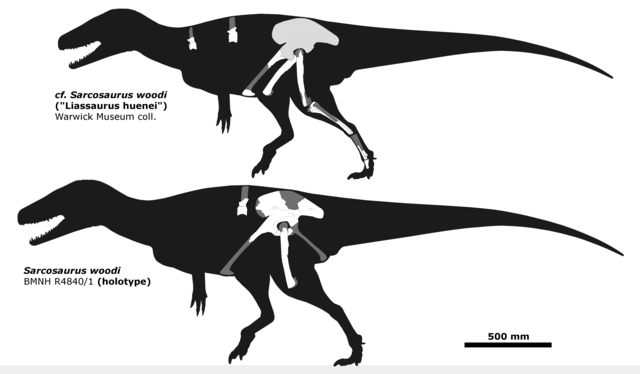 As its name suggests Sarcosaurus was a carnivore and there is not a lot of information about this dinosaur due to only partial remains being discovered. That is why assumptions have been made with the discoveries as we can see.

A theropod dinosaur that lived 216 to 196 million years ago during the Late Triassic period and fossils have been found in the US, South Africa, and Zimbabwe. Coelophysis was discovered by an American palaeontologist Edward Cope in 1887 and named in 1889.

Coelophysis was a small theropod that could grow up to 3 meters (9.8 feet) in length and was a meat eating dinosaur that relied on its speed and agility so it could catch its prey of insects and small reptiles. They had sharp teeth and claws which helped it hold on to its prey while it killed its food.

Wikipteryx, CC BY 3.0, via Wikimedia Commons