With its beautiful and rather large plates along its back make it instantly recognisable all over the world.

Stegosaurus is the largest and most famous member of the stegosaur family and would have been an incredible sight to see roaming the open plains of what is now North America in the late Jurassic Period 150 million years ago. 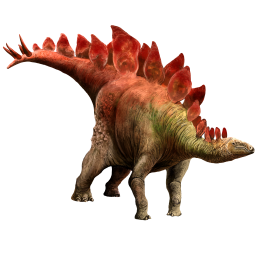 The very first Stegosaurus fossils were discovered in 1876 in Colorado by M.P. Felch. Stegosaurus was named by Othniel C. Marsh in 1877.

Most Stegosaurus fossils are found in Wyoming and Colorado in the United States of America (USA).

The most complete Stegosaurus skeleton ever found went on display in the Museum’s Earth Hall in December 2014.

WhEN DID stegosaurus LIVE?

Stegosaurus was alive around 150 million years ago, during the Late Jurassic period, in what was then a fairly harsh and barren environment.

what did STEGOSAURUS eat?

The types of plants that were around at the time include cycads, ferns and horsetails were Stegosaurus’ diet. Stegosaurus may have also eaten the occasional conifer tree saplings, but we’ll never be 100% sure.

Stegosaurus had teeth designed to chomp up lush vegetation at the back of its mouth but only to soft beak at the front. It is also widely accepted that it had weak jaw muscles, so it could probably only eat soft plants for food such as ferns.

How big was stegosaurus?

Stegosaurus was incredibly slow and heavy. It was roughly between 7-10 metres long which is roughly the length of two cars, and weighed one and a half tonnes.

Unfortunately, Stegosaurus wasn’t the smartest dinosaur in the world. Stegosaurus probably had the smallest brain out of any dinosaur that’s ever been discovered. Stegosaurus’ brain was around five centimetres long which is roughly the size of a walnut. Experts are still really puzzled as to why such a large animal had such a small brain.

Whatever the reason, Stegosaurus had enough brain power to raise young and defend itself for over 10 million years.

When Stegosaurus was first discovered experts thought that Stegosaurus might have actually had two brains, a really tiny one in its head and a much larger one at the base of his tail. This was later proved to be false. Experts initially thought Stegosaurus may have had two brains because the nerves in the tail bones were thicker than normal.

However, because Stegosaurus used its tail for defence and balance it probably just acted as a kind of nerve cell junction box to help control the tail and its huge back legs.

Stegosaurus had incredibly strong back legs, which were nearly twice as long as its front legs. Its flat feet had three big toes and one tiny one designed for carrying weight. Stegosaurus was not built for speed and was probably comparable to a modern day an armoured tank, slow but very powerful.

Stegosaurus front legs were very short in comparison to its back legs. Stegosaurus short front legs made it easier for the dinosaur to feed as its head was nearer the ground for grazing.

Stegosaurus was classed a ‘Bird hipped’ dinosaur. This means that the Stegosaurus hip structure was seemingly similar to that of modern-day birds 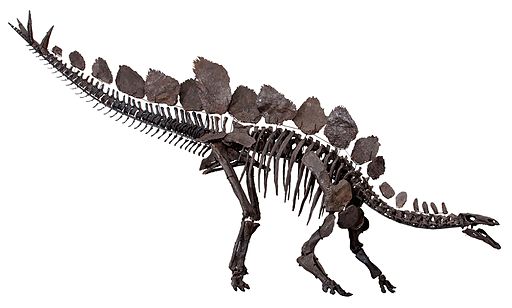 There is evidence to show that once the eggs were laid they were then buried and left to hatch in the warmth of the sun. Burying the eggs was to reduce risk to the eggs from egg snatching dinosaurs and other smaller reptiles that may have eaten the eggs.

Stegosaurus had a tail that was very thick and powerful with spikes and bony plates all the way down. At the tip of the tail were four large spikes with each one being up to one metre long.

Stegosaurus may have used this tail to defend itself and protect its young against any meat-eating (carnivorous) dinosaurs which came within close range. 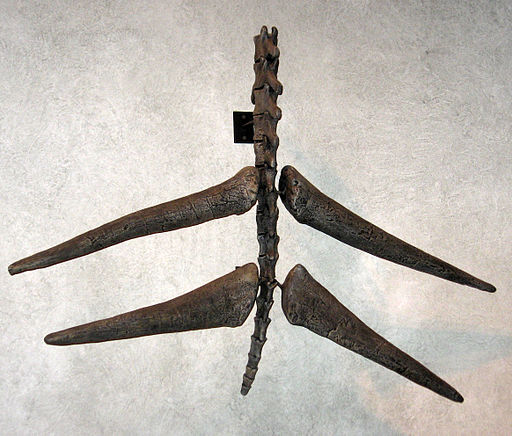 When fossils of Stegosaurus were first discovered, experts thought that the large bony plates that are found, running along the entire length of the animal laid flat on its back, almost like roof tiles. Therefore, it was given the name ‘roofed lizard’.

It was then suggested that the plates stood up vertically in parallel rows. As the animal was studied more and more evidence showed that one row of plates was probably slightly in front of the other, instead of being side by side.

Experts also believe the plates on his back were not sharp or pointed for the use in defence. Their plates were also full with blood vessels and were honeycombed inside.

Stegosaurus is one of several dinosaurs from the family ‘stegosaur’ that had upright bony plates along their backs, with Stegosaurus itself having the largest plates with some being around 60 centimetres long.

It’s a common misconception that these plates were fixed to the skeleton, when in fact they grew out the dinosaur’s skin. This left these plates vulnerable as they could easily be torn off by a large predator in a fight.

Experts also believe that the plates acted as some form of solar heating and air-cooling system, which Stegosaurus used to warm up its body, and to keep cool. Stegosaurus would have turned its body to face the sun collecting as much heat from the sun as possible in the early morning.

Being a reptile, it was cold blooded so once warm enough it could start moving around and begin feeding. 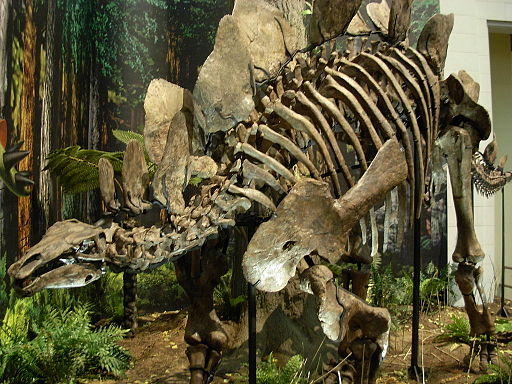 Scientists have also suggested that the plates on Stegosaurus’ back may have been brightly coloured. These plates could have been used to ward off other males and to attract females at the start of the breeding season.

Stegosaurus had several cousins that were very similar in size, stature and had spikes running down their bodies in a similar position to Stegosaurus.

Kentrosaurus had a very distinctive double row of spikes, rather than plates like the ones found in Stegosaurus. It had spikes near its head which were flat and broad, while the ones found on its tail were much narrower and the spikes on Kentrosaurus also pointed backwards.

It is possible that Kentrosaurus when challenged or being attacked would have charged backwards at its rivals, similar to what a porcupine would do today.

In some situations, Kentrosaurus may not have needed to use his spikes at all as it would have been a formidable opponent to predators, who would have probably been completely put off due to the high risk of injury.

If Kentrosaurus was threatened, it may have crouched down to make it difficult for a carnival to attack its soft underbelly similar to like hedgehogs do today.

Another cousin of the stegosaurus was the Lexovisaurus who was another well armoured dinosaur that has been found in modern England and northern France.

It had rigid plates running down its back that gave way to a row of sharp spikes when they reached the top of its tail.