Triceratops was a large and very powerful dinosaur. Triceratops walked on four very strong legs to support one of the largest heads found on any land-dwelling Dinosaur.

Triceratops had a very short tail, which wasn’t uncommon on large dinosaurs who walked on all four legs as they didn’t require the balance stabilisation.

Whilst most Dinosaurs would have been camouflaged to blend in with their surroundings, it is thought because Triceratops was so well armed and was such a large animal it didn’t need to be.

In fact it is believed that Triceratops was brightly coloured around its neck frill plate. Though we can’t be 100% sure what these colours may have been, it’s believed that these bright colours were to attract females. 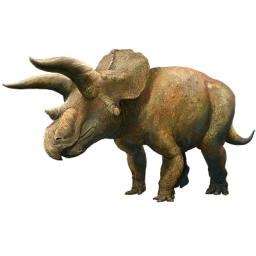 The first Triceratops bones were discovered in 1887 in Denver and were sent to Othniel Charles Marsh.

After much deliberation for almost a year – around if these bones were actually Bison bones – it wasn’t until 1888 that Othniel Charles Marsh gave the dinosaur its name of Triceratops.

WhEN DID Triceratops LIVE?

Triceratops was a Cerapod and it lived around 65-70 million years ago in the Late Cretaceous period, in what today would be classed as North America. As Triceratops was a herbivore it would have lived in an area with lush vegetation in plentiful supply to keep itself fit and healthy.

what did triceratops eat?

Triceratops was an herbivore and had a diet of shoots, leaves from trees and plants such as ferns.

Triceratops has a sharp beak to allow it to nip off leaves quickly before sending the food to the back of its mouth where rows of teeth which would help break down the contents of its mouth. Its beak isn’t too dissimilar to that you can find on a modern-day Parrot.

How big was triceratops?

Triceratops was a large and very powerful dinosaur that weighed as much as five rhinos and was around 9 meters long and 3 meters high.

Triceratops’ head was huge! Its head was around 2 meters in length and on top of it is where it had three massive spikes. Two were located above its eye sockets which were up to 1 meter long and nose its horn was around 18cm (7 inches) in length.

It would have been an incredible sight to have seen! A charging Rhino is very dangerous so can you imagine how terrifying being charged from an animal nearly three times its size would have been?

Even if a solitary Triceratops came under attack it would not have been an easy match for a predator. Scientists believe it may have crouched down as a warning before charging at its target to defend itself.

Battle of the beasts

As already mentioned, Triceratops is most recognisable for its large spikes found on its head and large neck frill plate.

It’s important to note the Triceratops didn’t just use its horns for defence, scientists also believe Triceratops may have used its horns to battle with other Triceratops for dominance or around the mating season. This behaviour is seen in Staggs, Rams and even Rhinoceros today.

To see two Triceratops charging at each other weighing in at over five tonnes each and nine metres in length would have been quite a sight. There is evidence to show that these types of fights rarely resulted in serious injury and where to establish the dominant male or around the mating season to impress the females. 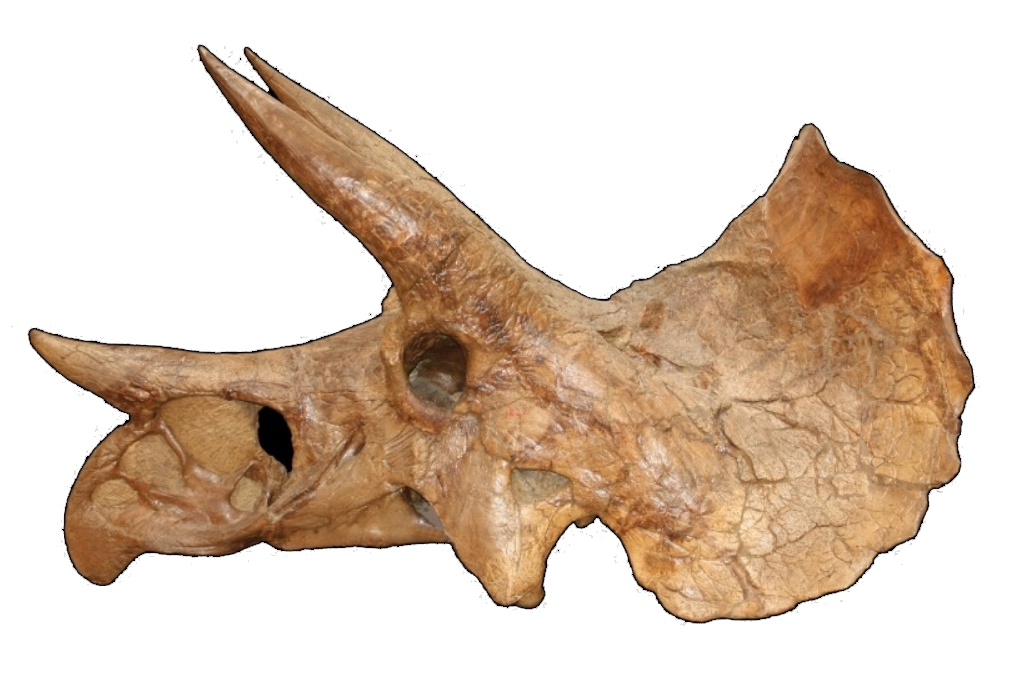 Horns acted as a deterrent

Triceratops and other Ceratopian dinosaurs would use their horns like that of Rhinoceros, as more of a statement and a very large (and sharp) warning to predators.

Scientists believe that Triceratops horns acted in many similar ways to that of a modern day Rhino, it makes more sense to scare away predators with huge long horns and to get into a real fight, where it risked being injured or even killed.

Some species of ceratopsian dinosaurs such as Utahceratops pictured, would have had two ‘windows’ towards the top which are located in-between the two large spikes at the top of its head. The reason for this ‘window’ was to help save weight as without these gaps in the neck frill plate it would have been incredibly heavy. 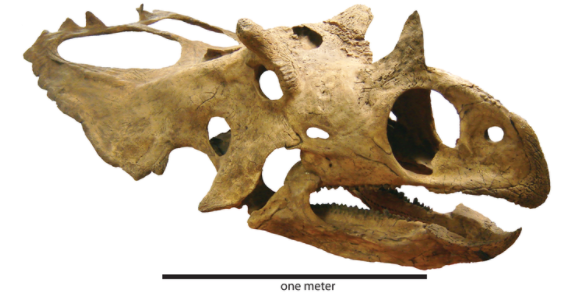 These two larger spikes curved forwards over the two frills ‘windows’. These windows within the fill plate were hollow and helped make the Centrosaurus head a little lighter. This was clearly a vulnerable point on Centrosaurus head, so these spikes would have protected it in battles with predators or during skirmishes with its own kind.

Centrosaurus was roughly around six meters in length and lived 75 to 80 million years ago. Fossils of Centrosaurus have mainly been found in Canada. 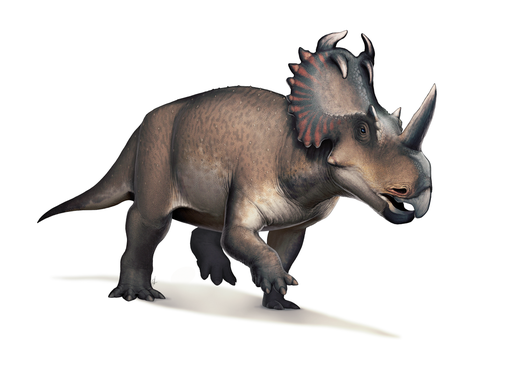 Styracosaurus which means ‘spiked lizard’ was very similar looking to Triceratops but had six long spikes points from its neck frill plate, including several short spikes around the sides and a large nose horn.

This large nose horn would have been used as a weapon to defend itself against predators or battles in the mating season.

Styracosaurus was roughly five to six meters long and lived 80 million years ago. 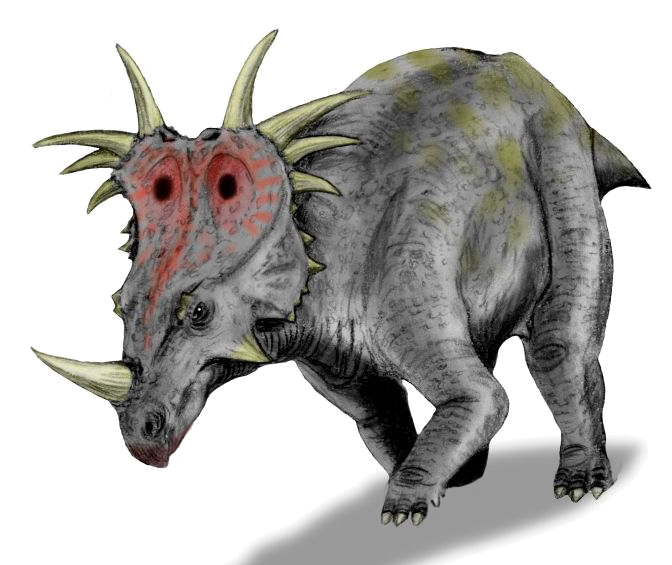 Chasmosaurus fossils tell us that it would have three main horns, including a nose horn and one horn found above each eye area. It is also believed that the males may have had longer horns than those found on female Chasmosaurus

Chasmosaurus was a very long frilled type of Ceratopsia Dinosaur that was roughly five meters in length and would have been found wandering the plains around 80 million years ago. 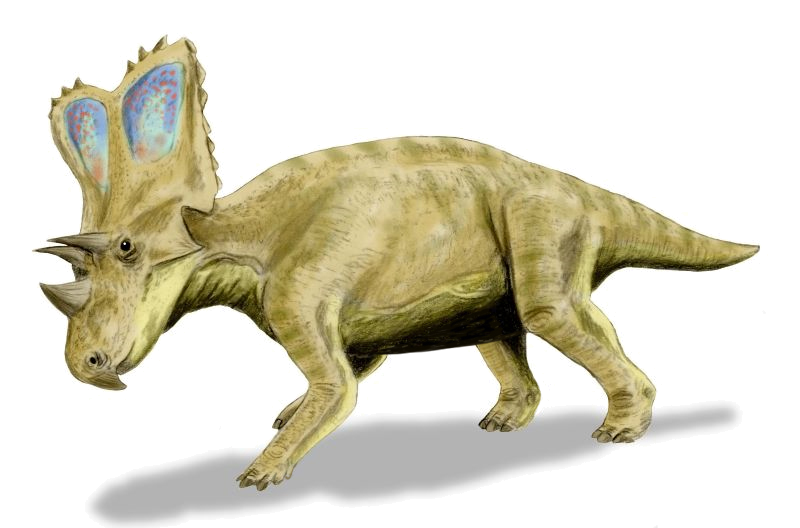 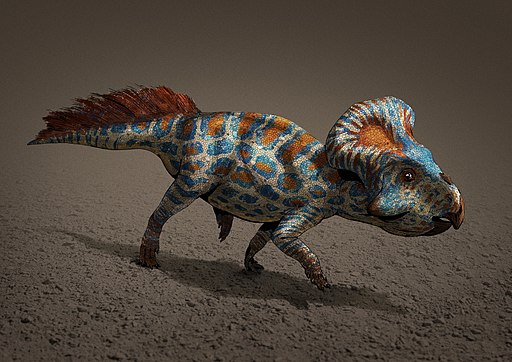