Carnotaurus (KAR-no-TAWR-us) Was a large predatory carnivorous dinosaur. Carnotaurus is derived from the Latin carno [carnis] (“flesh”) and taurus (“bull”) and can be translated as “meat-eating bull”.

what did CARNOTAURUS eat?

Carnotaurus was a carnivore and an incredibly effective killing machine. What still isn’t clear to scientists is just how this apex predator hunted.  Some scientists believe that Carnotaurus was strong enough to tackle large sauropods, even hunting along.

On the other hand, some scientific studies believe that Carnotaurus may have hunted smaller prey. So even though this is one of the most extensively studied dinosaurs, the jury is still out on how and what Carnotaurus hunted. 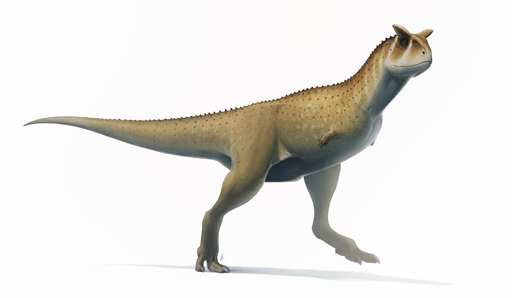 An incredibly well-preserved skeleton of Carnotaurus was discovered in 1984 by Argentinian palaeontologist José Bonaparte. This fossilised skeleton was so well preserved that it even had skin impressions. This adult Carnotaurus skeleton included much of the front of the Dinosaur, with very little of the legs and the tail left due to being eroded.

Because of the detail of the skeleton that was unearthed in 1984, palaeontologist have been able to study Carnotaurus extensively which has aided in some of the most accurate theropods reconstructions of any dinosaur found in the Southern Hemisphere. So much so that a replica Carnotaurus can be seen in the Natural History Museum of Los Angeles which includes an accurate skin reconstruction.

WhEN DID carnotaurus live?

Carnotaurus lived in Patagonia, Argentina (La Colonia Formation) during the Maastrichtian stage of the Late Cretaceous period, what is now South America, between 72 and 69.9 million years ago.

How big was CARNOTAURUS?

Even though Carnotaurus was quite a large Dinosaur, it was lightly built for speed and pure power. Studies of some of the most complete skeletons of a carnivorous dinosaur determined that Carnotaurus was between 7.5 to 9m (24.6 to 29.5 ft) long and weighed around 1.35 tonnes or 1350kg.

Carnotaurus’ head was around 59.6 cm (23.5”) in length and had two very distinctive horns (more on these later). These two horns were found just above the eyes and were around 15 cm (5.9”) in length. Like other theropods such as the Tyrannosaurus Rex, Carnotaurus had two very small arms up front, which were deemed to be almost useless in helping this apex predator hunt.

They did not have claws and the fingers were fused together and immobile. Carnotaurus had an unusually long neck compared to other Albelisaurs and a very short snout. Its head was small with box shaped jaws. Carnotaurus may have had binocular vision, as unlike many dinosaurs, its eyes were forward facing. Along its back, Carnotaurus had a row of bumps which increased in size towards the spine. Carnotaurus was a bipedal dinosaur and walked on 2 legs. Carnotaurus probably ate young plant eating dinosaurs, though there is still much debate about its diet.

What makes Carnotaurus even more exciting to study from a scientific perspective is that skin impressions have been found from several areas of its body including Carnotaurus jaw, with the largest area of fossilised skin found was around the tail. Incredibly that when Carnotaurus was first discovered a large amount of skin was around the right-hand side of its skull. Unfortunately, this wasn’t correctly identified at the time and – yep you guessed it – removed… A proper ‘head in hands moment’ for the paleontologists working on this particular specimen.

This was an incredible discovery as this was the first time a theropod dinosaur, especially one that was so unique, had fossilised skin. Discoveries like this can help scientists piece together a more accurate picture of what dinosaurs such as Carnotaurus may have looked like 72 million years ago. Carnotaurus lacked feathers, unlike the more advanced coelurosaurian theropods. 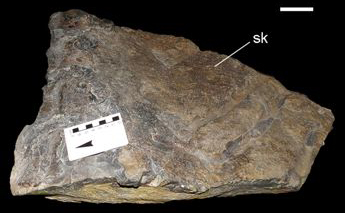 Published by Rafael Delcourt., CC BY 4.0, via Wikimedia Commons

The most noticeable feature of Carnotaurus was its head due to two large horns found just above its eyes. So far, no other carnivorous dinosaur has been discovered with two horns on its head making Carnotaurus very unique.

Each horn was around 15 cm (5.9”) in length, and whilst many scientists have hypothesised what these horns were used for, from mating, hunting or even allowing other Carnotaurus to identify each other.

In 1988 a clever chap called Greg Paul hypothesised that Carnotaurus may have used its horns to fight with other Carnotaurus to ascertain dominance, perhaps over territory, or a meal. Greg Paul believed that Carnotaurus may have acted like modern day Rams or Goats who lock horns to establish dominance, which is prevalent in males. It’s important to note that the horns found on Carnivorous were blunt, and not sharp which possibly rules out that these horns were used to kill prey.

We of course will never know what Carnotaurus may have used its horns for, but what we do know is it made it one of the best-looking Dinosaurs. 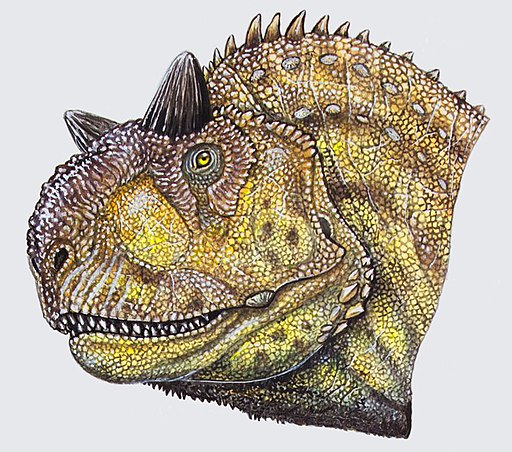 Art by Maurilio Oliveira. Published by Rafael Delcourt., CC BY 4.0, via Wikimedia Commons

COULD RUN AT 35MPH

Carnotaurus was able to run so quickly thanks to a large muscle found in its tail and thigh area that structurally was slightly different to other theropod dinosaurs, enabling it to have better balance and flexibility as speed.

Aucasaurus was closely related to Carnotaurus and looked fairly similar too, however it didn’t have horns like those found on Carnotaurus instead it has two low ridges above each socket.

Aucasaurus wasn’t as big as Carnotaurus but was a mid-size predator. Scientist Gregory S. Paul estimated that Aucasaurus was around 5.5m in length and weighed around 700kg. So still a very sizable dinosaur, but around half the weight of Carnotaurus.

Aucasaurus also had very short arms that were pretty much useless. Most noticeably was that Aucasaurus hands which were a little different too. The most noticeable difference between Aucasaurus hands and its bigger brother Carnotaurus were that it had four Metacarpals, which are the lower finger bone in your hand, but didn’t have finger bones on it’s first and fourth. The second and fourth digits had finger bones but were short and had no claws… You can see why we’ve described them as being pretty much useless.

Abelisaurus was a fierce carnivorous dinosaur which would have been found in what is now South America in the Late Cretaceous Period around 83 and 80 million years ago. Very little is known about Abelisaurus as, well, very little bones have been found of this Dinosaur. Scientists have made predictions as to the size of Abelisaurus which they believe to have reached an estimated 7.4 metres (24 ft) in length and 3 tonnes in weight.

The only thing that scientists are able to study of this dinosaur is a preserved skull, that was discovered in 1983. The skull itself is 85 centimetres (33 in) long.

We certainly hope that science discovers more Abelisaurus remains in the future, to gain a better understanding of this mysterious dinosaur. 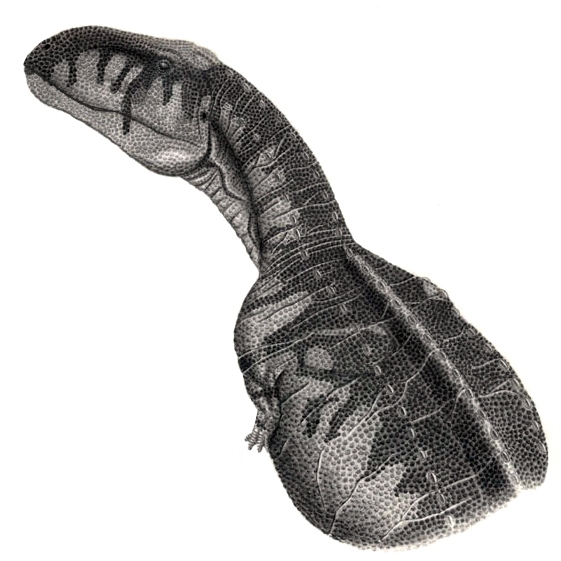