If you’re new to the world of dinosaurs, you may have instantly recognised Spinosaurus from its leading role in the third instalment of Jurassic Park. Spinosaurus was one of the largest predators to ever walk the Earth up to 16 metres long, (even bigger than a T-rex) with a long and thin head packed full of teeth, and a beautiful colourful sail that ran down its back Spinosaurus was one hell of a Dinosaur. 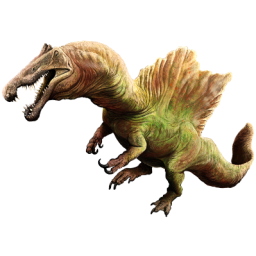 Ernst Stromer, a German paleontologist discovered Spinosaurus around 100 years ago in Egypt. This partial skeleton was then carefully excavated and transported to a museum in Munich, Germany.

The good news is that without Ernst Stromer discovery we would never have known the existence of Spinosaurus. The bad news is that very little remains of his discovery still exist as the museum was bombed in the second world war.

Thankfully, further discoveries of Spinosaurus have been found since then, with the biggest display of Spinosaurus bones being found at the National Geographic Museum in Washington DC, USA.

what did Spinosaurus eat?

A recent study which came out in January 2021 which stated that whilst the Spinosaurus likely fed off from the water and may even have swum, the research concluded that the dinosaur would have struggled to be a fast and efficient swimmer and so could not be effective enough to chase fish in the water.

How big was spinosaurus?

Spinosaurus was massive! Scientists believe that it was between 10-18 meters in length and weighed up to nearly 20 tonnes. Even compared to other huge dinosaurs such as Giganotosaurus and Carcharodontosaurus, Spinosaurus was a terrifying dinosaur.

Scientists believe that Spinosaurus lived both on and in the water due to two pieces of evidence, which have been discovered by analysing the fossils of Spinosaurus.

The first piece of evidence is that Spinosaurus had what has been described as a ‘paddle’ like tail which Spinosaurus would have used to propel itself along underwater.

The second piece of evidence is that this dinosaur had extremely large bone density in its leg which would have helped to keep this large Dinosaur in control of its large body when swimming.

Some scientists believe that Spinosaurus may have also had webbed feet, with soft tissue in between its toes to help with underwater propulsion.

As Spinosaurus moved around in the beautiful sunshine in –what is now- North Africa, the sail would have acted as a solar panel in the cooler mornings to help it warm up and would have helped the Spinosaurus to cool down throughout the day, in what would have been a very warm environment.

Spinosaurus’ head was long around 80-100cm in length, thin and deadly, and isn’t too dissimilar to that of a modern-day crocodile.

Like many other carnivorous dinosaurs Spinosaurus had very powerful jaws which could open extremely wide and then snap back incredibly quickly, instantly crushing bone.

It is thought that Spinosaurus would have turned to the side to face the warm sunshine in the early morning to allow its sail to soak up the heat.

The sail itself was huge around 2- 3 meters in height so the Sun’s rays would have spread throughout the rest of Spinosaurus’ large body. The sail was so effective that it would capture enough heat to keep Spinosaurus warm for the rest of the day.

If Spinosaurus got too hot, perhaps after hunting or fighting it would use the sail to reduce its body temperature by either facing towards the wind, letting the wind hit its large sail to cool the body. The sail would have acted like a pressure valve and released any excess heat from its body. 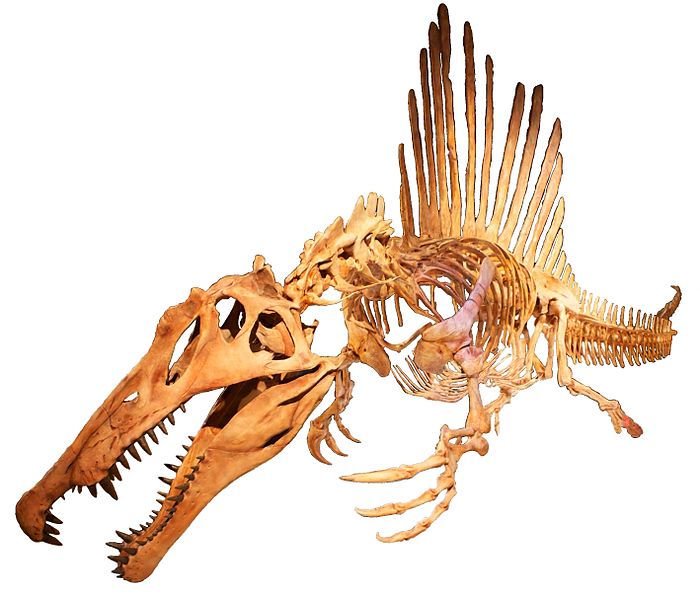 Mike Bowler from Canada, CC BY 2.0, via Wikimedia Commons

Altispinax (Al-ti-spy-nax) meaning ‘high thorn’ had spectacular spines on its back. Together they looked like the sail on a ship and may have been used to threaten rivals.

However, the spines were not very strong and could be easily damaged in a fight. Altispinax was 8 meters long which is roughly the length of two cars. It lived in northern Europe 130 million years ago.

Metriacanthosaurus was a large carnivorous theropod dinosaur that lived in and around what is now Northern Europe towards the end of the Jurassic Period. Metriacanthosaurus had large spines that ran down its back, these certainly weren’t anywhere near the same size of Spinosaurus.

Metriacanthosaurus is one of those dinosaurs that scientists don’t really know much about. Very few skeleton remains have been found of this dinosaur. Scientists unfortunately use a great deal of speculation to get an understanding of how this cousin of Spinosaurus may have looked and behaved in the Jurassic period. 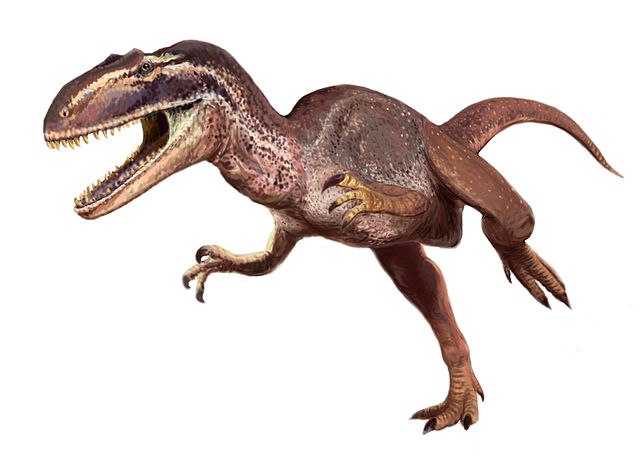 One of the most stunning dinosaurs, Acrocanthosaurus had a set of tall spikes that ran all the way down it’s spine around the neck area. Acrocanthosaurus is also believed to have had spikes on its hips and around its long upper tail. The spikes found on this dinosaur were big, but not as big as Spinosaurus’s.

Acrocanthosaurus also had quite a unique way of communicating to either attract mates or to warn off other Acrocanthosaurus during the mating season. Some scientists believe that it would stand up as high as it could taking in as much air as possible before releasing the air, making a deep noise from within its rib cage.