During the Triassic period, 220 million years ago, the land was just a gigantic landmass called ‘Pangaea’. For over 50 millions years, this land had been ruled by creatures such as the ‘Placerias’ (pronounced pluh-SEHR-ree-us) amongst others.

These one tonne beasts were not related to the dinosaurs. They were ancient reptiles and although there had been many varieties of the Placerias, these were the only ones of their kind left in existence at this time.

Placerias were gentle herbivores with tusks that were used for digging up roots. However, these tusks could prove as lethal weapons should conflict breakout between two angry males.

These Placerias had now become endangered species. One group of dinosaurs that were already evolving were the Coelophysis, they were very agile and amazingly adapted for killing. It is said that Coelophysis were the very first dinosaurs. For the Coelophysis, the large, swaggering, slow moving Placerias were perfect prey. Coelophysis would of course target the old and the weak, as a herd of healthy Placerias could put on an aggressive display and deter their agile predators.

Along with these large beasts, and the early dinosaurs, there existed small mammal-like animals. These small creatures were the descendants of the mammals we know today. 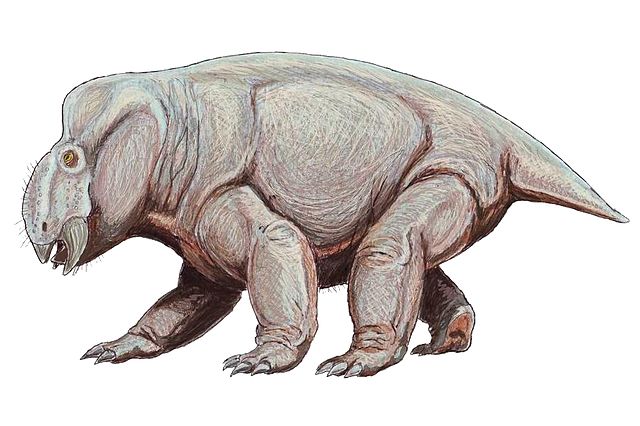 During this ever changing Triassic period, there existed a bizarre mammal-like animal called the ‘Cynodont’ (si-no-dont) meaning ‘Dog Teeth’. They were one of the most diverse groups of Therapsids, traditionally called mammal-like reptiles. Cynodonts were named after their dog-like teeth. Cynodonts measured 1 – 1.5 metres in length and weighed up to 20 kilograms. They were omnivores and fed on roots and insects.

Cynodonts had nearly all the characteristics of mammals. Their teeth were fully differentiated, the braincase bulged at the back of the head, and many of them walked in an upright manner unlike reptiles.

missing link between reptiles and mammals?

This peculiar creature was apparently a missing link between reptiles and mammals. When it ran, its backbone moved from side to side like a reptiles, however, this creature had hair and was warm blooded which would have insulated them and helped to maintain a high body temperature. They lived in a burrow and nurtured their young. Cynodont pairs had an extremely strong bond and they would pair and mate for life.

During their evolution, Cynodonts teeth changed from being designed for catching and holding prey and then swallowing whole, to the addition of specialized teeth, including molars, designed for better chewing of food allowing for quicker digestion.

Improved hearing gave these creatures a better awareness of their environment and, in turn, this increasing sensitivity called for a greater capacity for processing the auditory information in the brain. Cynodonts also developed a secondary palate in the roof of their mouth. This allowed air to flow to the lungs through the back of the mouth, allowing Cynodonts to chew and breathe at the same time. This characteristic is present in all mammals.

Like reptiles, as all Mesozoic proto-mammals probably did, Cynodonts laid eggs. However, after their eggs had hatched, unlike many dinosaurs who would abandon their eggs and young, the Cynodonts would stay with their eggs until hatched and their young would be totally dependant upon their parents. During their first 3 months, the young would feed from special milk glands on the mothers stomach.

The young were totally protected from predators. During the day, Cynodonts would stay safe and secure in their burrows, but during the night, the male would hunt while the female cared for the young. In extreme cases, where the Cynodont family faced danger from predators, such as the Coelophysis digging into their burrows, the Cynodonts would take extreme measures in survival. Cynodonts would eat their own young, not out of hunger, but to deny the dinosaurs of their food and give them a chance to escape.

A new burrow would be dug out in a new location, a new clutch of eggs would be laid and in the not too distant future, this strategy of investing in their young would become a natural instinct for mammalian descendants.

Cynodont fossils have been found in the Petrified Forest, Arizona, USA. 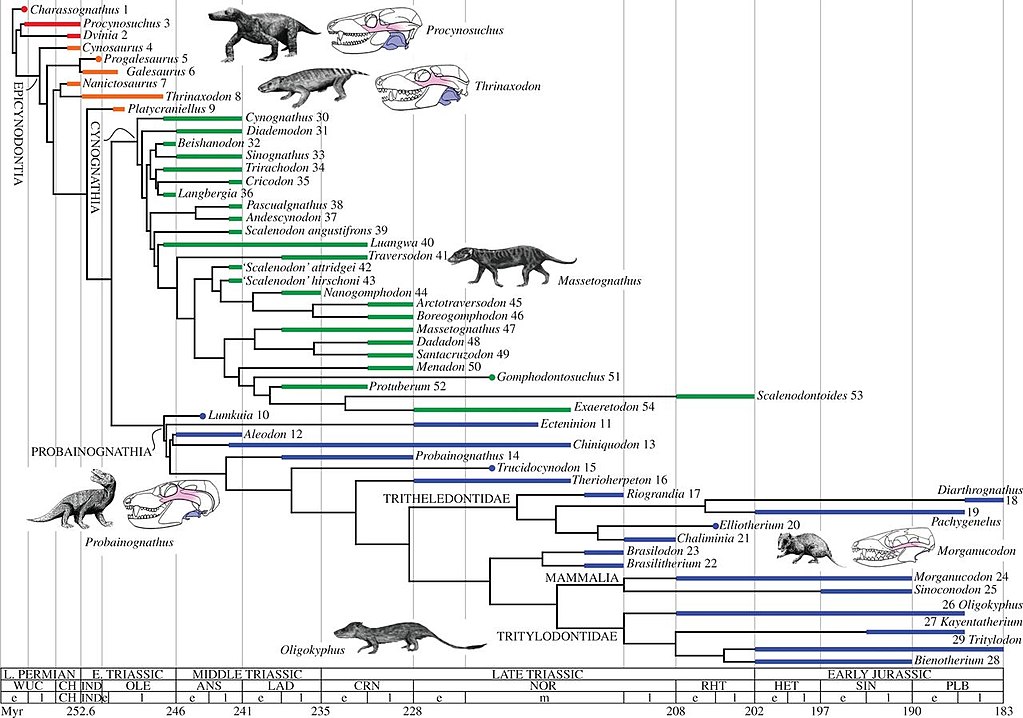 Another class of mammalian was the Triconodonta (Trick-on-oh-donter), which is the generic name for a group of early mammals which were the close relatives of the ancestors of all present-day mammals. Triconodonts lived between the Triassic Period and the Cretaceous period and were distributed over the Northern continents. Triconodonta may have looked quite similar to the Cynodont. It was the size of a small modern-day cat.

Their name, meaning ‘Three conical teeth’, is based on one of their fundamental characteristics. Triconodonta had the typical structures of the proto-mammals, small, furry, tetrapod animals with long tails.

Their young were fed on milk secreted from their mothers. They probably had a nocturnal lifestyle to avoid dinosaur predators, only coming out from their burrows after dusk to hunt for small reptiles and insects. However, it is said that some Triconodonts were indeed able to take on small dinosaurs.

Another small mammal-like animal was a small scavenger called the Didelphodon (die-DELL-fow-don). It was a marsupial type of animal from the Late Cretaceous of North America that raided abandoned dinosaur nests. Dinosaurs were quite vulnerable to these small creatures because they laid there eggs on the ground, and Didelphodons were little opportunists when it came to discovering these nests.

It was a nocturnal animal that relied on its keen sense of smell for hunting. Didelphodon would have been an omnivore because they ate eggs and little plants. Of course, small lizards would have also been food for Didelphodon.

The Didelphodons face looked quite similar to that of a small bear, even though actually it looked more like an opossum. Their teeth had specialized blade-like cusps and carnassial notches, which indicates that the Didelphodon was a predator. Their jaws were short and very large and contained huge, bulbous premolar teeth which appear to have been used for crushing.

Although perhaps only a little larger than a Badger, it was one of the largest mammals of the Mesozoic. The maximum length of a Didelphodon could be around 3 feet and the maximum they could weigh was around 45 pounds.

In the far future, the age of mammals will dawn and they will grow to huge sizes, however, at 45 pounds, this is about as big as a Cretaceous mammal could be.

The end of the Triassic period concluded with a mass extinction accompanied by huge volcanic eruptions about 199 – 214 million years ago. The super land mass, Pangaea, began to break apart. As a result of this extinction, 35% of all animal families died out, including virtually all labyrinthodont amphibians, conodonts, and all marine reptiles except Ichthyosaurs.

Most synapsids,(amniotes), which had dominated the Permian period and early Triassic period, were extinct except for the mammals.

Most of the early, primitive dinosaurs also went extinct, however, other more adaptive dinosaurs evolved during the Jurassic period. It is not certain what caused this late Triassic extinction however, possibilities include global cooling or an asteroid impact. A 210 million year old meteor crater surrounding Manicouagan Reservoir, Quebec and Canada, may be the remains of the cause.

This extinction allowed the dinosaurs to expand into many niches that were now unoccupied. Dinosaurs would become increasingly adaptable, dominant and diverse in their abundance, and would remain that way for the next 150 million years.