Baryonox was a large theropod dinosaur that is said to have been the first fish eating (piscivorous) theropod known. The thinking behind this was down to fossil remains of fish scales being found in the stomach area of a specimen, more of this further down the page.

The origin for Baryonyx’s name and discovery is probably one of the most interesting stories. It is far from the dinosaur discovery race that took place in America by rival palaeontologists in the 1800’s, but rather an English plumber who was an amateur fossil collector. 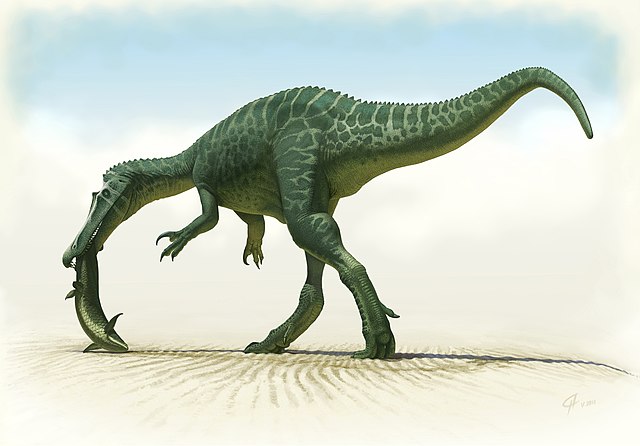 One of the main and most distinguishing features of Baryonyx is its skull. To the untrained eye you would be forgiven to think it looked remarkably like a corocodile but Baryonyx was in fact a theropod dinosaur.

With its long jaws and snout it was able to sweep into the water quickly to pick up its prey and use its hands like a modern bear by holding onto its food with a strong grip.

There has been debate whether Baryonyx was quadruped (uses four limbs to weight bear) which was a unique feature amongst theropods, palaeontologists over the years have published papers both agreeing and disagreeing on this theory.

In 1983 William Walker an English plumber, was exploring a clay pit in Surrey, England, when he found a rock that had, what he thought, has a large claw fossil. It was only when he got home did he realise the tip was missing so he went back some weeks later to the same spot to search for the missing bit. He then discovered another bone and part of a rib. William then took his discovery to the Natural History Museum of London where palaeontologists inspected and reported back it was from a theropod dinosaur. A team of 8 went to excavate the site and over 2 tons / 2,000kg’s of rock was taken away and it then took 6 years for the to get all the bones out of the rock which resulted in 65% of the skeleton being recovered.

Then name Baryonyx was given to the specimen by the two British palaeontologists leading the fossil excavation in 1986 and the name means “heavy” or “strong” (Barys) and “claw” (onyx). The skeleton found was named Baryonyx walkeri after the English plumber who discovered it.

Since then other findings in the UK have been attributed to the Baryonx and there was even a discovery in Portugal which was later ruled out by a British palaeontologist.

How big was Baryonyx?

Scientists are split whether the Baryonyx walker was fully developed or not, which means if it wasn’t then this sauropod may have been much larger when fully grown.

Even if a solitary Triceratops came under attack it would not have been an easy match for a predator. Scientists believe it may have crouched down as a warning before charging at its target to defend itself.

At first the palaeontologists that named Baryonyx thought that the dinosaur was not spend much time in water but it could like most land vertebrates swim if needed. There has since been much debate and because of its crocodile like long snout some scientists have thought it was inevitable that Baryonyx was a piscivorous (fish-eating) species. With this theory in mind its thought it lived near water.

WHAT DID BARYONYX EAT?

Baryonyx would have hunted its prey like other predators by using its forelimbs and large claws to catch its prey before using its crocodile like teeth to eat with.

As discussed above it was thought that Baryonyx ate fish and there has been hypothesises that the dinosaur used crocodile like adaptions of eating its prey using its long, narrow jaws.

The name Spinosaurus means “spine lizard” and was named by a German palaeontologist Ernst Stormer in 1915 after the first fossils were found in Egypt in 1912, fossils have also been discovered in Morocco.

Spinosaurus was a theropod dinosaur which lived during the Late Cretaceous period 99 – 93.5 million years ago in what is now, North Africa. It was one of the largest known carnivorous dinosaurs and estimations have measured it being between 12.6 to 18 meet (41 to 59 feet) in length and anywhere from 7 to 20 tons (7,000 to 20,000kg) in weight. It was heavier and longer than Tyrannosaurus Rex. 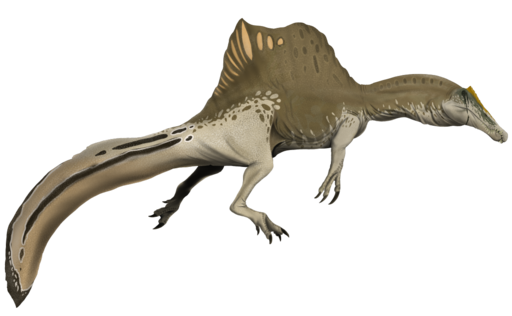 It is thought that Spinosaurus ate fish and land animals as it lived both on land and in water, like modern crocodiles. This made it a dangerous predator to its prey due to its diverse living ability and like other spinosaurids it had a narrow, long beak, and as its name suggests a very prominent spinal structure. The sail like feature has been said the sails were used like a display structure that would have been visible from far away.

Some palaeontologists also believe that sails could have been brightly coloured, and it could have also been used to regulate its body temperature by storing fat or absorbing heat. After fairly recent findings this last theory was rejected as scientists did not think the structure held enough blood vessels to allow it to regulate temperature effectively.

See the page for Spinosaurus where the latest research is discussed.