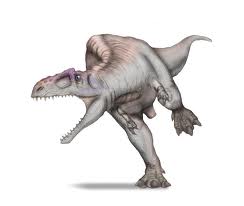 Wakinosaurus (wack-in-o-sawr-us) was a theropod dinosaur that lived during the Early Cretaceous Period, 144 – 125 million years ago, in northern Kyushu Island, Japan.

Because of the lack of fossil finds, this dinosaur can only be speculated on. Wakinosaurus was probably bipedal and walked on its clawed hind limbs and had small clawed fore limbs. Its head would have been large and equipped with sharp teeth and it would have had a long, stiff tail that helped it to counter-balance.

Wakinosaurus Was a carnivorous dinosaur that would have terrorized large plant eating dinosaurs. It would have been a fierce predator and probably an opportunist scavenger as well. 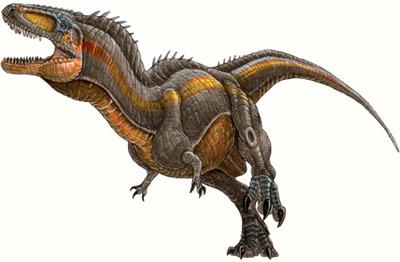 Walgettosuchus (WALL-get-tuh-SOOK-us) was a genus of theropod dinosaur. It lived in the Albian Age during the Early Cretaceous, around 119 – 113 million years ago, in Griman Creek Formation, Lightning Ridge, New South Wales, Australia.

Walgettosuchus measured around 10 feet in length, 15 feet in height and weighed around 175 pounds. This large, bipedal theropod was a tetanuran. It had short, clawed fore limbs and an elongated head equipped with sharp, serrated teeth. Its hind legs were powerful and also equipped with sharp claws. Walgettosuchus had large eyes and is thought to have been a very fast creature. Its tail was long and stiffened and would have been used as a counter-balance when quickly changing direction.

Walgettosuchus was a carnivorous dinosaur and would have terrorized large plant eaters. They may have hunted in packs. These dinosaurs were related to birds.

Wannanosaurusis (wah-NAN-oh-SAWR-us) was tiny dinosaur and a genus of pachycephalosaurian that lived in the Campanian Age during the Upper Cretaceous period, around 83 – 73 million years ago, in what is now Anhui, China. Wannanosaurus was an Ornithischian dinosaur, the order of bird-hipped dinosaurs.

Wannanosaurus measured 2 feet (60 centimetres) in length. It was a bipedal dinosaur and walked on its 2 strong hind legs. Wannanosaurus had a thick-set body and 2 short forelimbs. Its stiff tail was used as a counter-balance as it walked or ran and when changing direction. Its skull was thick and flat on the top. Wannanosaurus resembled Pachycephalosaurus, however, it was much smaller and its head was much flatter.

Wannanosaurus was a herbivore and grazed on low lying vegetation such as soft plants, fruit and seeds. This small dinosaur may have lived in herds. Running was probably the first line of self-defence. Its thick skull may have been used for ramming rivals during mating and dominance combat, for attracting mates or as a last chance of self-defence against predators. 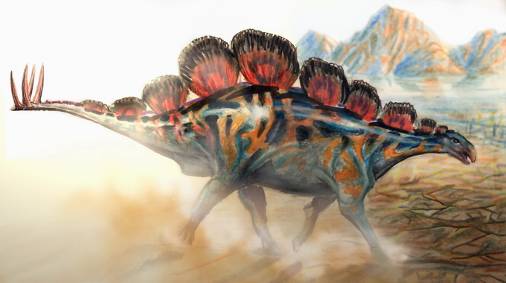 Wuerhosaurus (Woo-air-hoe-sore-uss) is a genus of stegosaurid dinosaur that lived in the Valanginian – Albian ages, during the Early Cretaceous Period, 135 million years ago, in China. Wuerhosaurus was one of the last genera of stegosaur known to survive, since most others died out in the late Jurassic.

Wuerhosaurus was an armoured dinosaur and measured 27 feet (8.1 metres) in length, 6 feet (1.8 metres) tall at the hips and weighed 4 tons. Wuerhosaurus was a stegosaurid (related to Stegosaurus) that had bony, rounded plates along its back and 4 bony spikes at the tip of its tail (thagomizers) that were used as self-defence. It had a shorter body and wider hip bones than other stegosaurids. Wuerhosaurus had a very small head and probably many cheek teeth. It was a quadrupedal dinosaur and walked on all 4 legs. It may have had hoof-like feet.

Wuerhosaurus was a herbivore. Wuerhosaurus was lower to the ground than most other stegosaurs. Scientists believe that this was an adaptation to let it feed on low-lying vegetation.