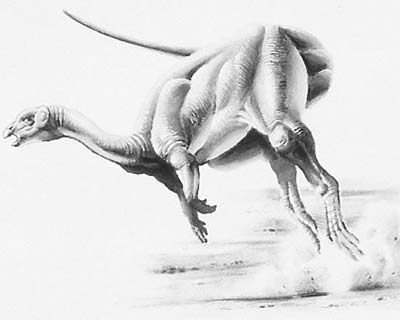 Yandusaurus measured 5 feet (1.5 metres) in length, 1 foot (0.3 metres) in height and weighed around 7 kilograms (15 pounds). It was a small, bipedal dinosaur that moved around on its 2 strong hind legs that were built for fast running which helped this little dinosaur evade fierce predators.

Yandusaurus had 4 clawed toes on each foot and 5 clawed fingers on each hand. Scientists do not know whether its hands were able to grasp it. Its body was lightly built and its neck was long and thin. Its long, pointed tail was used for balance and to change direction quickly when running and escaping predators.

Yangchuanosaurus (Yan-hoo-an-owe-sore-uss) was a large theropod dinosaur that lived in the Oxfordian – Kimmeridgian stages during the Late Jurassic Period, 158 – 156 million years ago, in China.

It was similar in size and appearance to its North American contemporary, Allosaurus. Yangchuanosaurus comes from the Upper Shaximiao Formation and was the largest predator in a landscape which included the sauropods Mamenchisaurus, Omeisaurus as well as the Stegosaurs.

Yangchuanosaurus measured 33 feet (10 metres) in length and weighed around 3 – 4 tons. It had a very large skull which could measure up to 3.5 feet (1.1 metres) long.

Like many predatory dinosaurs, Yangchuanosaurus had a low crest that ran along the front of its snout, from the nose to slightly in front of the eyes, with multiple hornlets and ridges, which is similar to Ceratosaurus.

Yangchuanosaurus had huge jaws contained many large, sharp teeth which it used to crush its prey. It had a massive tail that was about half its body length.

Yangchuanosaurus was a bipedal dinosaur and walked on its 2 large, powerful, hind legs which were equipped with 3 large clawed toes. Its fore limbs were short and equipped with 3 clawed fingers on each hand. 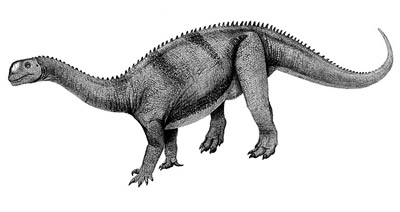 The prosauropod dinosaur family includes this genus. The species is thought to have existed in the modern Asian Woodlands about 190 million years ago, during the early Jurassic period.

Yimenosaurus was a herbivorous dinosaur that grazed higher than any other modern herbivore, allowing it to graze on lofty tree foliage. It features a long tail and a light, small head at the end of a long neck that functions as a counterbalance. Yimenosaurus diet made it’s spoon-shaped teeth useless to breakdown the vegetation. So, to help it would eat stones that helped digest the rough plant fibres.

The first fossil skeleton of the genus was discovered in Yimen, China, in the Fengjiahe Formation. Several Yimenosaurus remains have been unearthed, together implying that these dinosaurs may have lived in herds.

Yimenosaurus fossil records include an almost complete skull and mandible as well as incomplete cervical and dorsal vertebrae a mostly complete sacrum, an ilium, ischia, partial ribs, and a complete femur.

Yimenosaurus was around 30 feet long and weighed approximately 2 tons, according to the fossil bones. Yimenosaurus defining qualities were its massive stature, long neck, longtail, and powerful legs with serrated teeth.

Furthermore, a fragmentary cervical and dorsal vertebrae, all sacral vertebrae, an ilium, both ischia, a complete femur, and incomplete and damaged ribs.

The paratype, YXV8702, is known solely from a fragmentary skull, numerous cervical and dorsal vertebrae, three sacrals, a few caudal vertebrae, a scapula-coracoid, an entire pelvis, and nearly both hindlimbs.

Yingshanosaurus (ying-shan-oh-sore-us) is a genus of dinosaur that lived in the Oxfordian – Tithonian stages during the Upper Jurassic period, 159 – 142 million years ago. It was a Stegosaur which lived in what is now China. It was similar to another Stegosaur, Tuojiangosaurus, but slightly smaller.

Yingshanosaurus measured 17 feet (5 metres) in length and weighed around 1.6 tons. Yingshanosaurus differed from its plate-backed relatives as it had a pair of huge wing-like spines on its shoulders, which were flat, like the 2 rows of small bony plates along its back.

It had a spiked tail which it probably used for defence by swiping its attacker. Its head was long and its jaws contained many cheek teeth which enabled it to chew tough vegetation. It was a quadrupedal dinosaur that moved around slowly on 4 thick-set legs which may have had hoof-like toes. 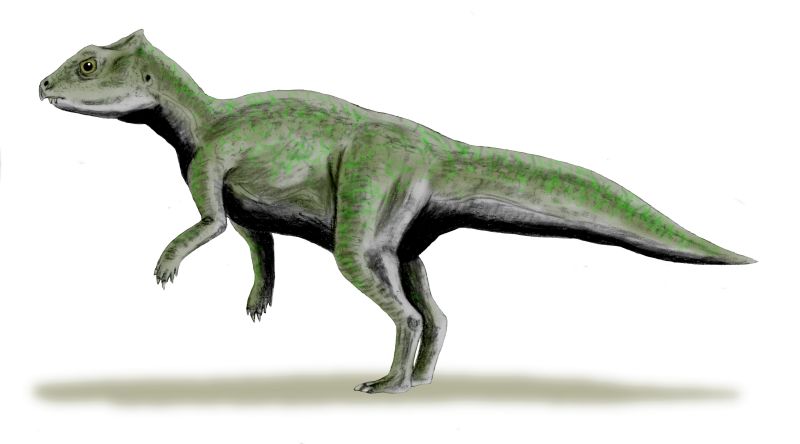 Yinlong (Yin-long) is a Chinese word that means “hidden dragon” and refers to a tiny, mostly bipedal herbivore dinosaur.

It lived in Asia’s terrestrial areas during the Late Jurassic period. It existed from the Oxfordian Age until 157.3 million years ago, and its fossils have been discovered in areas like Xinjiang (China).

Yinlong was a basal ceratopsian dinosaur genus, discovered in rock strata dating from 159 to 154 million years ago during the Oxfordian and Kimmeridgian phases of the Late Jurassic period.

Yinlong is thought to be the first undisputed ceratopsian dinosaur and the most primitive Jurassic dinosaur to be discovered.

It contains a rostral bone or beak, which distinguishes it as a ceratopsian, as well as a little frill-like structure on the top of its head, which is a Pachycephalosaurian attribute. As a result, it is a unique dinosaur with characteristics from both families of dinosaurs, placing it in the Marginocephalia group, which includes both ceratopsians and Pachycephalosaurians. However, Yinlong’s skull had several characteristics that are common in heterodontosaurids, indicating that it is connected to heterodontosaurids. The genus Yinlong has only one species, Y. downsi, which was named in honor of American paleontologist William Randall Downs III.

In the Junggar Basin of the Shishugou Formation in China’s Xinjiang Province, a well-preserved skeleton with the head of a Yinlong was discovered. Because this location was close to where the renowned film “Crouching Tiger, Hidden Dragon” was shot, the dinosaur was given the name Yinlong, which means “hidden dragon” in Mandarin.

Yinlong’s ancestors would evolve into the massive quadrupedal herbivores like Triceratops who thrived at the end of the Cretaceous, despite their tiny size and bipedal stance.

This first ceratopsian dinosaur would have weighed around 33 lb (15 kg), similar to a Heterodontosaurus. Though its speed is unknown, it may have been faster than subsequent ceratopsians because to its smaller size, weight, and  moving about on its hind legs, known as bipedalism.

The skull and well-preserved skeleton of a Yinlong provide some insight into its appearance. It had a huge, deep skull that was larger than the majority of Ornithischia members. The top or back of the skull was somewhat elevated, and it had a beak at the end of its upper jaw. However, it did not have a full frill like later ceratopsians. Its forelimbs were slim and small, with three digits, while its hind legs were longer. Its tail, as well as some other components, have yet to be found in fossil remains.

Yinlong was a herbivore with beaked snouts to cultivate vegetation. Seven gastroliths were discovered in the belly cavity of Yinlong, which are digestive tract stones that are utilized to crush plant matter. It’s possible that the Yinlong never went extinct after the Late Jurassic and instead evolved into the Cretaceous ceratopsians, but there’s no way to know for sure. 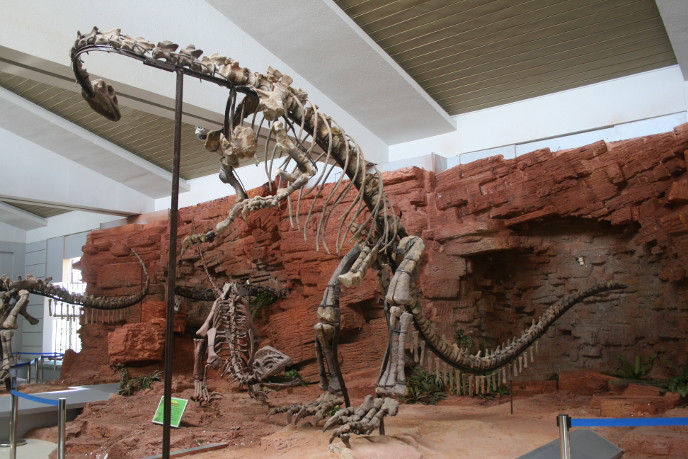 Yunnanosaurus (YOU-NAN-oh-SAWR-us) is a genus of prosauropod dinosaur that lived in the Hettangian – Pliensbachian ages, 208 – 194 million years ago, during the Early Jurassic period, a position in time that makes it one of the last prosauropods. Yunnanosaurus is closely related to Lufengosaurus.

Yunnanosaurus is a medium sized dinosaur and measured 23 feet (7metres) in length, 7 feet (2 metres) in height and weighed 600 kilograms (1,300 pounds).

Larger species could measure up to 42 feet (13 metres) in length. Yunnanosaurus had more than 60 spoon-shaped teeth in the jaws and were unique among prosauropods in that its teeth were self-sharpening because they would grind against each other as the dinosaur ate.

Scientists consider these teeth to be advanced compared to other prosauropods. This primitive sauropodomorph had a long neck, long tail and a small, narrow head with a short snout. Yunnanosaurus also had a skull that had a different shape than its earlier relatives. 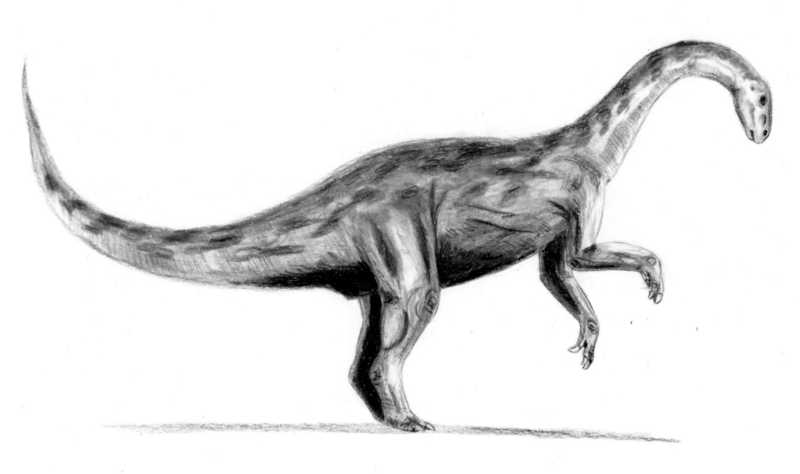 Yunnanosaurus (you-NAN-oh-SORE-us) known from a Greek word meaning “Yunnan lizard” was an extinct sauropodomorph dinosaur that lived between 201 and 168 million years ago in what is now Yunnan Province, China.

The largest specimens measured 23 feet (7 meters) in length and 6.5-13 feet (2-4 meters) tall. Yunnanosaurus would have walked on four legs. Yunnanosaurus, does not appear to be an obligatory quadruped, with study of the hip, limbs, and overall lighter build indicating that Yunnanosaurus could at the very least rear up on its hind legs.

Yunnanosaurus is regarded as a significant species because its characteristics were bestowed with an unanticipated development that occurs during the convergent evolution transition. Yunnanosaurus skulls had over 60 relatively advanced, 60 spoon-shaped sauropod-like teeth, indicating the start of the species’ next stage. Yunnanosaurus’ teeth, however, evolved separately from the rest of its morphology, which was unlike that of sauropods.