Fukuiraptor means “thief of Fukui” which is in reference to the location of the first find in Japan and named in 2000. The quarry where it was found was home to several more fossils of lots of individuals of the same species. They found remains of femurs, teeth, and humeri but were of the bones were of juveniles.

Scientists believe that Fukuiraptor may have been larger, as initially they thought the first discovery was of a juvenile. But then once the others were discovered and scientists stated that they were actually smaller which has brought about some confusion. But we will have to wait for an adult to be discovered to get that confirmed.

The conclusions based on the findings show that either the first Fukuiraptor fossil was an adult, which it was therefore a small theropod, or it was similar to tyrannosaurids who spent years small and a big growth spurt. 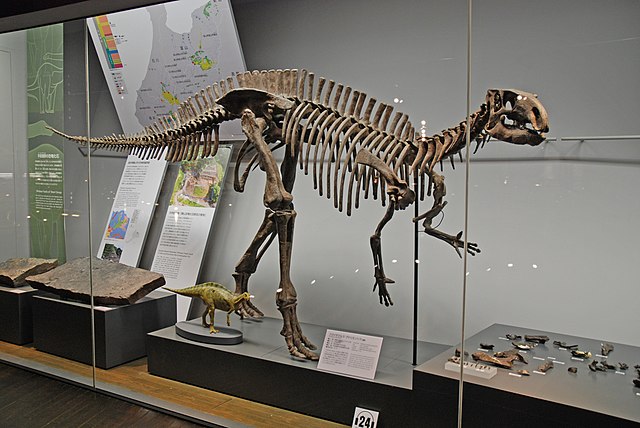 Fukuisaurus was a herbivorous ornithopod and was discovered in a Japanese city called Katsuyama, Fuki Prefecture. Fukuisaurus is after this location and means “Fuki lizard”. The fossil remains were discovered in 1989 and was named in 2003 by Japanese palaeontologists. Since this original discovery other fossils have been found and much of the skeleton is now known.

The original find full name was Fukuisaurus tetoriensis with the specific name referring to where the fossil was found.

Fukuisaurus moved around on two legs but could also move on four limbs if needed. According to studies its jaw was very different to other dinosaurs as it did not have the ability to move in a sideways chewing motion.

The picture of the Fukuisaurus is from the Fukui Prefectural Dinosaur Museum where they have an impressive forty skeletons in a “dinosaur dome”, and is one of the most popular museums in Japan.