Only fossil teeth of Revueltosaurus have been found in New Mexico and Arizona, USA. Revueltosaurus was originally described as an ornithischian dinosaur based on several discoveries of teeth, but was reclassified when a partial skeleton was discovered in 2004.

The newly discovered full skeleton of a Revueltosaurus makes it clear that the teeth are not of a plant-eating dinosaur, but of a herbivorous or perhaps omnivorous crocodilian ancestor living a mostly terrestrial life in the uplands of the Late Triassic. It may have been one source of meat for the developing theropods around the world.

The animal, one of many creatures from the Late Triassic known only from their teeth, was thought to be an ancestor of the plant-eating ornithischian dinosaurs like Stegosaurus and Triceratops, which roamed the world millions of years later in the Jurassic and Cretaceous period. Because the teeth look like those we know from herbivorous ornithischians, people assigned them to the dinosaurs.

Rhabdodon (RAB-doe-don) was a genus of Ornithopod dinosaur that lived in the Campanian age during the Upper Cretaceous period 83 – 65 million years ago in Europe including Austria, France, Romania and Spain. It is unclear whether Rhabdodon was an Iguanodont or a Hypsilophodont, and may be a ‘missing link’ between the two.

Rhabdodon measured around 12 feet (4 metres) in length. It was smaller than its relatives, possibly due to the insular environment that existed in Europe during the Cretaceous period. Rhabdodon had a blunt head and large, rod-shaped teeth. Its hind limbs were longer than its fore limbs and they were all probably clawed. This bipedal dinosaur had a long stiff tail which was used to counter-balance itself. Being a small dinosaur, it would have probably been able to run fast.

Rhabdodon was a herbivore and ate prehistoric plant material to sustain itself.

Rhoetosaurus, (REET-oh-SAWR-us) was a genus of Sauropod dinosaur that lived in the Bathonian to Callovian Ages during the Middle Jurassic Period, 181 to 175 million years ago in what is now Queensland, Australia. This dinosaur is very similar to other sauropods of that age, such as Shunosaurus from China.

Rhoetosaurus measured a huge 60 feet (18 metres) in length and weighed 20 tons. It had a long tail and a very long neck with a small, box-like head. Its body was heavily built and bulky and it stood on 4 powerful, trunk-like legs. It would have probably had hoof-like feet, much like todays modern elephants. Rhoetosaurus would have had many cheek teeth that were suitably adapted to grinding up tough vegetation. It may have had gastroliths (stomach stones) in its stomach to help digest tough plant material.

Rhoetosaurus was a herbivore and would have eaten a huge amount of plant matter to sustain its great size.

Riojasaurus (ree-OH-ha-SAWR-us) was a prosauropod dinosaur that lived during the Late Triassic and Early Jurassic periods 221 – 210 million years ago in La Rioja Province in Argentina. Riojasaurus is the only known Riojasaurid to live in South America.

Riojasaurus measured 33 feet (10 metres) in length and weighed 1.1 tons. It was heavily built and had a bulky body and was quadrupedal, moving slowly around on 4 thickly built legs. Its leg bones were dense and massive for a prosauropod and its hinds limbs and fore limbs were not much different in size. Riojasaurus had relatively longer hands and feet than a sauropod and more of its digits were tipped with claws. Riojasaurus had a very long neck and a long tail. No skull was found with the first skeleton of Riojasaurus, but its long slender neck suggests that its head was quite small. Its vertebrae were made lighter by hollow cavities, and unlike most prosauropods, Riojasaurus had 4 sacral vertebrae instead of 3.

Riojasaurus was a plant eater (herbivore) and fed up on foliage on tall conifer trees, raking off the leaves and needles with its spoon-like teeth. Riojasaurus used its flattened teeth to cut and grind plants. This huge dinosaur would have had to eat huge amounts of vegetation to sustain itself. 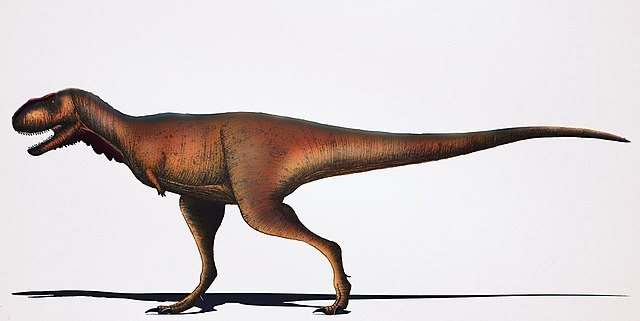